"Real Life in the Calchaquí Valley" 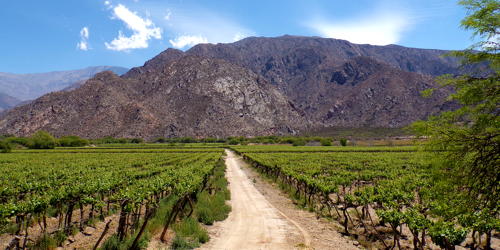 "Real Life in the Calchaquí Valley"
Week 15 of the Quarantine
By Bill Bonner
SAN MARTIN, ARGENTINA – "This week, we are looking at the hurt inflicted on the U.S. economy by the fake money system. It suits the top 10%; the other 90% suffer. Today, we comment only that however much hurt we’ve had so far… there’s a lot more to come. The feds – left and right – have lifted anchor and set sail. They’ve charted a course that will take them onto the high seas… amid terrible storms and torments… where they will confront horrible sea monsters… to where, finally, they will fall off the edge of the Earth. And there’s no turning back… But we take a break to tell some stories…
Stories From the Ranch: On Friday, we were on our way to the ranch when we came upon a pickup truck parked astride the road… backed up to the hillside on the left. A whole family – mother, father, and two children – was digging out the dirt and throwing it into the back of the truck. Seeing us approach, the man moved his truck out of the way. Then, we saw who it was – people from our own farm. “That’s Victor… and those two children are in my classes,” said Elizabeth.
“What are you doing?” we asked Victor. “Oh, just getting some dirt. I need to plaster my garage. This is the best mud for it.” Earlier that same day, Victor had told us his story... “My mother died when I was 11. I had nowhere to go. But I was lucky. The [ranch] owner’s wife took me in. I lived with them for years. She was very nice to me. A great woman. Later on, she helped me find my family. But by then, I was 14, and ready to go to work.”
English Lessons: Elizabeth is teaching classes at the clinic on the edge of the farm. All the schools here are closed. Children are supposed to learn via the internet. But many of them have no access to the internet. And the level of public education is generally low – at least, here in the valley. So, Elizabeth – unaware that she may be defying some government order – volunteered to give lessons in English and math. 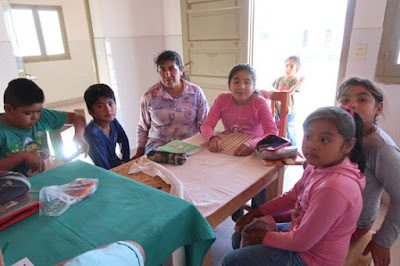 Some of Elizabeth’s students.
Some of her students are young children. But there are adults who want to learn English, too. Victor was working in a hotel nearby (an hour and a half away on a dirt road). He thought learning English would help him. But asked why he wanted to learn English, he gave a fuller answer…  “I grew up right next to your ranch. Over the mountains. It was rough there. Especially when my mother died. I remember one time, one of the local people went crazy. I don’t know why. But he wandered over to your ranch.
We knew he was crazy. When he didn’t come back, we all went to look for him. He was supposed to be going back to his mother’s place, over the mountains on your ranch. But he must have taken a wrong turn. And then, it started snowing. There wasn’t much we could do. They didn’t find him until seven years later. You know Laetitia? It was her mother who found him when she was out with her goats. Just bones and some clothes.”
Innocent Question: Stories from the Calchaquí Valley are always interesting. They are elemental. Real life. Real death. Love. Hate. Heat. Cold. No BS. No complaints. No claptrap. They are a welcome relief from the news media. “What’s your favorite animal?” Elizabeth asked her English class. She held up pictures to stir replies. “Dog.” All agreed. “Who here has a dog?” she followed up. All the hands went up, but one. It was little Jose. “Jose, you don’t have a dog?” “No… I used to have a dog. But he was a bad dog. Then, he disappeared. I found him down by the river, hanging from a tree. Somebody had hung him. I guess he killed their chickens.” “Oh…”
Playing It Cool: We arrived at the ranch on Friday night. 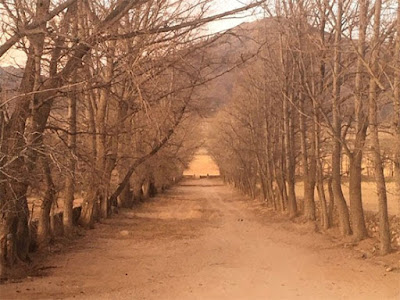 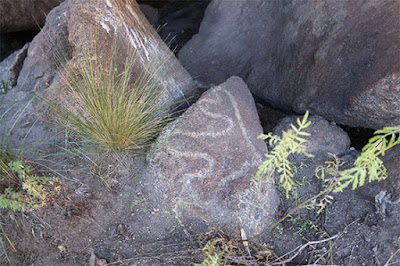 A petroglyph found on the way to Nolberto’s farm.
“There are ruins… mostly those little retaining walls… up in the hills behind here.” Nolberto gestured to the mountainside behind his house. I’m surprised archeologists have never been here to study it. They’ve been all over the ranch. I don’t know why they’ve never come here.” “Well… We’ll have to explore it ourselves,” we replied.
Update on Affair of the Heart: “How’s Laetitia?” we asked Elizabeth. (She is openly fooling around with a married man. The married man’s wife recently sought Elizabeth’s help to put a stop to it.) “I don’t know. She was supposed to talk to me after she decided what to do. But she hasn’t come back. All I know is that when I saw her, she looked happy. Probably not a good sign, under the circumstances.”
Siesta Time: After our travels, it’s time for a siesta…" 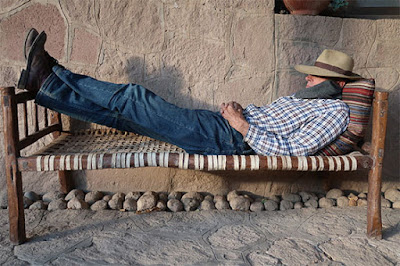 Don Bill takes a siesta.
"Hasta Mañana…"
- www.rogueeconomics.com
Back to Feed
Use left/right arrows to navigate the slideshow or swipe left/right if using a mobile device