Staying Safe During a Lightning Storm

by admin July 12, 2020
From VOA Learning English, this is the Health & Lifestyle Report. Lightning is one of the most powerful weather forces to hit Earth. These huge bolts of electricity that strike during storms can cause destruction and death. Lightning can heat the air around it to temperatures five times hotter than the surface of the sun. Lightning is very common. It is estimated that every second, about 100 lightning strikes hit the surface of the Earth. Experts at the website WeatherSTEM did the math and say this adds up to about 8 million strikes per day, and 3 billion hits each year!   In some parts of the world, for example India, summer lightning storms are very common. As the rainy season begins there, storms often cover most of the country’s northern area. This is when lightning and thunderstorms happen most. Lightning can be deadly. It is difficult to keep exact records on how many people die from lightning each year throughout the world. Some experts estimate that about 2,000 people die each year from lightning. Others say the number could be as high as 24,000. The last week in June, Reuters news agency reported lightning strikes killed more than 100 people in two areas of India. How to stay safe Later in this program, we will give you some tips on helping a lightning strike victim. But first, experts at the weather.gov website, give tips on staying safe if lightning comes your way. Outdoor lightning storm If you are outside, experts say you should take cover, which means finding a safe shelter for protection. During a lightning storm, no place outside is safe. If you hear thunder, lightning is close enough to strike you. Most lightning victims are in open areas or near a tree When you hear thunder, experts say, immediately try to move to safe shelter. Look for a strong, established building “with plumbing and electrical wiring.” If lightning strikes this kind of building, the experts say, the plumbing and wiring will conduct the electricity better than the human body. If such a building is not available, you can also seek shelter inside “an enclosed, metal-topped vehicle” with all the windows shut. You should stay in the safe shelter for at least 30 minutes after the last sounds of thunder are heard. Nowhere to hide If you are outside during a lightning storm and there is no safe shelter, these actions may reduce your risk: Immediately leave high land areas, such as hills or mountains. Never lie flat on the ground. Never shelter under a tree sitting in the open. Immediately get out of any bodies of water and stay away from those areas. Stay away from objects that can conduct electricity, such as wire fences, tall structures, power lines or windmills. Indoor lightning storm If you are indoors during a lightning storm, you could still be in danger. Again, weather.gov provides these tips. Stay off wired phones, computers and other equipment that can put you in direct contact with electricity. Avoid any areas with running water. Remain indoors but stay away from windows and doors. Do not lie on concrete floors or touch concrete walls. Aid for a lightning strike Experts at the U.S. Centers for Disease Control and Prevention say that helping lightning strike victims can save their lives. It is safe to touch a lightning strike victim. People struck by lightning DO NOT carry a charge. The CDC says to follow these four steps immediately to help a lightning strike victim: Call for Help Call for professional help immediately. It is safe to use a cell phone during a storm. Get to Safety Lightning may continue to be a danger. If necessary, move the victim to a safer location. However, do not move victims who are bleeding or appear to have broken bones. Check the Victim Lightning often causes a heart attack. Check to see if the victim is breathing and has a heartbeat. Lightning may also cause other injuries such as burns, shock, and sometimes physical damage to the body. Resuscitate If the victim is not breathing, immediately begin mouth-to-mouth resuscitation. If the victim does not have a pulse, start cardiopulmonary resuscitation, or CPR. Continue this until help arrives. Try to keep the victim warm to prevent hypothermia, or abnormally low body temperature. And that’s the Health & Lifestyle report. I’m Anna Matteo. ________________________________________________________________   Words in This Story   bolt – n. a stroke of lightning tip – n. a piece of useful or secret information concrete – n. a hard, strong material that is used for building and made by mixing cement, sand, and broken rocks with water plumbing – n. a system of pipes that carries water through a building conduct – v. to have the quality of transmitting light, heat, sound, or electricity resuscitate – v. to bring (someone who is unconscious, not breathing, or close to death) back to a conscious or active state again pulse – n. the beat resulting from the regular widening of an artery in the body as blood flows through it cardiopulmonary compression – n. a procedure designed to restore normal breathing after cardiac arrest that includes the clearance of air passages to the lungs, mouth-to-mouth method of artificial respiration, and heart massage by the exertion of pressure on the chest : cardiopulmonary – adj. of or relating to the heart and lungs 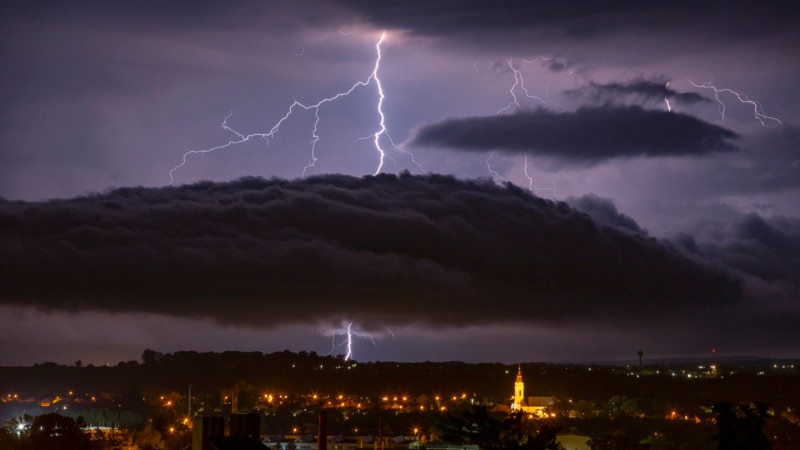