Student Community Statement: 8 Demands for Transformative Change, University of Texas at Austin | The Times They Are A’ Changin’

by admin July 10, 2020
I was listening last night to Bob Dylan's famous song, "The Times They Are A' Changin.'" You can hear the song and listen to the lyrics here.  Here are my favorite verses of the song that speak to the current student movement:

Come mothers and fathersThroughout the landAnd don't criticizeWhat you can't understandYour sons and your daughtersAre beyond your commandYour old road isRapidly agin'.Please get out of the new oneIf you can't lend your hand For the times they are a-changin'.

As in the 60s and early 70s, this was a generational battle, as well as an institutional one against inadequate and harmful policies, practices, and priorities. Read on to read our University of Texas at Austin student's demands.

Student Community Statement: 8 Demands for Transformative Change, University of Texas at Austin June 9, 2020
To sign your name onto the statement, please fill out this form: http://tinyurl.com/UTChange. Please do not request edit access.
In light of the recent murders of George Floyd, Breonna Taylor, Ahmaud Arbery, Tony McDade, and countless others as a result of systemic racism and violence against the Black community, 149 student organizations at UT Austin have made statements calling for donations and action against racism on campus. A petition created by UT students with 13,000 signatures (and counting) calls on the University to acknowledge its racist history. The UT student community has come together to identify 8 tangible action items that the University must take to condemn racial violence and support Black, Indigenous, and People of Color (BIPOC) communities on UT’s campus.
As Interim President Jay Hartzell publicly stated in his first email to the student body, “The University of Texas has always had a mandate to be a ‘university of the first class.’ Part of that mandate means that this university and the people of this community will take an active role in addressing the critical problems our society is facing”. UT must now act on this public commitment by taking an active role and listening to students. BIPOC student leaders should be at the forefront of these conversations.
We call for the University of Texas at Austin to 1) divest from the Austin Police Department and the University of Texas Police Department, 2) implement a test-optional undergraduate and graduate admissions policy, 3) incorporate land acknowledgments in all UT programming, 4) use a multi-faceted approach to incorporate conversations on race and systemic racism in the United States 5) rename Robert Lee Moore Hall, Painter Hall, Littlefield Hall, Littlefield Patio Cafe, Littlefield Fountain, Belo Center for New Media, James Hogg Auditorium, and remove the James Hogg Statue to stop honoring people who perpetuated racism on this campus, 6) discontinue the use of “The Eyes of Texas” at all UT related events, 7) adopt equitable and inclusive practices in the recruitment, selection, and promotion of UT faculty, and 8) institutionalize and fund a campus climate survey.
Several action items from this statement have been requested by UT students for many years. Student legislative records show the same requests being made and delayed, forcing students to graduate before seeing their initiatives followed through. Students recognize that this unfortunate cycle is not uncommon in higher education. Amidst the Black Lives Matter movement, several universities across the U.S have broken this pattern and made steps towards achieving similar action items. They have set the precedent for UT to do the same. A “university of the first class” should not only condemn racial violence and show support for BIPOC communities through words. Our mandate to be a “university of the first class” requires action.
The UT student community demands that administrators listen to students in this period of historical change by addressing these 8 tangible action items and working to make our campus more equitable and inclusive.
This statement was collaborated with and endorsed by the following BIPOC UT student organizations:
UT National Association for the Advancement of Colored People Chapter
Onyx Honor Society
Association of Black Computer Scientists
Native American and Indigenous Collective
Afrikan American Affairs
African American Culture Committee
Zeta Phi Beta Sorority, Incorporated - Omicron Theta Chapter
BlackPrint
UT’s Chapter of the National Association of Black Journalists
UT's Chapter of the National Society of Black Engineers
Black Health Professionals Organization
Black Business Students Association
UT’s Chapter of the National Black Law Students Association
Black Honors Student Association
Black Student Alliance
Black Graduate Students Association
To sign your name onto the statement, please fill out this form: http://tinyurl.com/UTChange. Please do not request edit access.
Signed by 4,045 UT students, staff, faculty, and alumni.[61] See Appendix A for a distribution of signatures across these categories and across UT Colleges.
Table of Contents for Signatures:
7. Appendix A: Distribution of Signatures Across Colleges and UT Affiliations[62]
[1] https://www.kxan.com/news/local/austin/everything-we-know-about-the-pregnant-woman-shot-in-the-stomach-at-austin-protest/
[2] https://www.kxan.com/investigations/everything-we-know-about-the-teenager-officers-shot-in-the-head-with-less-lethal-round-at-austin-protest/
[3] https://www.austintexas.gov/department/city-council/2020/20200604-reg.htm
[4] https://rare.us/local/houston/alleged-white-supremecists-stake-out-the-university-of-texas-campus-only-to-be-left-with-no-climax/
[5] https://twitter.com/porgemoji/status/1179063784092119040?s=21
[6] https://time.com/5843911/george-floyd-death-university-of-minnesota-police/
[7] https://theappeal.org/minneapolis-city-council-members-announce-intent-to-disband-the-police-department-invest-in-proven-community-led-public-safety/
[8] https://utexas.app.box.com/v/HB-Initial-Recommendations
[9] http://tiny.cc/changing-sexual-misconduc
[10] https://www.theatlantic.com/ideas/archive/2019/09/how-ut-used-standardized-testing-to-slow-integration/597814/
[11] http://tiny.cc/test-optional-adm
[12] https://www.universityofcalifornia.edu/press-room/university-california-board-regents-approves-changes-standardized-testing-requirement
[13] https://www.nacacnet.org/globalassets/documents/publications/research/defining-access-report-2018.pdf
[14] https://www.chronicle.com/article/Who-Would-SAT-Only-Admissions/246548
[15] https://www.theatlantic.com/education/archive/2016/03/the-problem-with-the-gre/471633/
[16] https://www.nature.com/articles/nj7504-303a
[17] https://www.utnsc.org/on-test-optional-admissions-policies
[18] http://www.praxisuwc.com/praxis-blog/2019/10/18/university-writing-center-land-acknowledgement
[19] https://studentsuccess.utexas.edu/360-connections
[20] https://racialgeographytour.org
[21] http://chng.it/dy2jtdy4bX
[22] https://www.usnews.com/news/best-states/alabama/articles/2020-06-08/u-of-alabama-move-confederate-plaques-study-building-names
[23] https://thedailytexan.com/2019/10/07/ut-must-rename-rlm-to-physics-math-and-astronomy
[24] Hersh and John-Steiner, Loving and Hating Mathematics, Princeton University Press, 2011
[25] Albert C Lewis, The beginnings of the R.L. Moore school of topology, Historia Mathematica, Volume 31, Issue 3, 2004,   Pages 279-295.
[26] https://0408b5f2-b87d-4194-9020-54b6c63cb1ff.filesusr.com/ugd/b20254_4cf90ee4254d4622965cc7325a2191c0.pdf
[27] https://drive.google.com/file/d/1ENVxnsVZYmH-RJRTWje0A4x7w-3SjrkB/view
[28] https://drive.google.com/file/d/13dPbWP4Qe-cU8MIbR2MC37BB-s_bSvQ9/view
[29] https://utsenate.squarespace.com/s/SR-1904-A-Resolution-In-Support-of-the-People-for-PMA-Movement-and-PMA-Related-Inclusion-Initiatives.pdf
[30] https://peopleforpma.wixsite.com/saypma
[31] http://www.houseofrussell.com/legalhistory/sweatt/ctm/ctm5-12a.htm
[32] http://www.houseofrussell.com/legalhistory/sweatt/ctm/ctm5-12b.htm
[33] https://scholar.google.com/scholar_case?case=8240107906648855246
[34] https://www.austinchronicle.com/news/2015-05-29/written-in-stone/
[35] https://diversity.utexas.edu/integration/2014/06/a-dignified-response-heman-marion-sweatt/
[36] http://www.houseofrussell.com/legalhistory/sweatt/ctm/ctm4-13.htm
[37] https://www.Blackpast.org/african-american-history/sweatt-heman-marion-1912-1982/
[38] https://tshaonline.org/handbook/online/articles/fsw23
[39] https://web.archive.org/web/20080828193350/http://www.tnf.net/halloffame/belo07.htm
[40] https://universityunions.utexas.edu/hogg-memorial-auditorium
[41] https://www.tribtalk.org/2017/06/22/missing-a-chance-to-address-the-role-of-racism-in-uts-history/
[42] https://thedailytexan.com/2018/12/03/keep-hogg-off-campus-grounds
[43] https://racialgeographytour.org/tour-stop/right-side-of-littlefield-fountain/
[44] https://racialgeographytour.org/tour-stop/womens-campus/
[45] https://notevenpast.org/the-racial-geography-tour-at-ut-austin/
[46] https://www.statesman.com/NEWS/20170824/UT-president-sued-for-removing-Confederate-statues
[47] http://chng.it/dy2jtdy4bX
[48] This demand is directly found in the change.org petition signed by nearly 10,000 people as well as in the Onyx Statement
[49] https://abcnews.go.com/OnCampus/story?id=7160813&page=1
28 https://www.tsl.texas.gov/ref/abouttx/statesong.html
[50] https://www.census.gov/quickfacts/TX
[51] https://reports.utexas.edu/spotlight-data/faculty
[52] https://nces.ed.gov/programs/digest/d18/tables/dt18_315.20.asp
[53] https://accountability.tamu.edu/All-Metrics/Mixed-Metrics/Faculty-Demographics
[54] https://diversity.utexas.edu/actionplan/
[55] https://diversity.utexas.edu/actionplan/progress-updates/
[56] https://equity.utexas.edu/faculty-recruitment-and-retention/recruitment-toolkit/?fbclid=IwAR1lWDMZ6CvvbsaGwqvXdXlr4Dz2HpGdAbgZQkZwFzFCkDV0G-e37dBT_i0
[57] https://www.insidehighered.com/news/2019/03/05/major-survey-shows-professors-worry-about-discrimination-arent-prepared-deal
[58] https://docs.google.com/document/d/1rZT85YOomey9GYV0N8KHD3femVeiSKAAOaRWO6u-nEg/edit
[59] https://thedailytexan.com/2019/12/05/course-instructor-surveys-must-account-for-student-safety
[60] https://www.utsystem.edu/sites/clase
[61] As of 8pm, June 17th, 2020
[62] As of 8m, June 17th, 2020 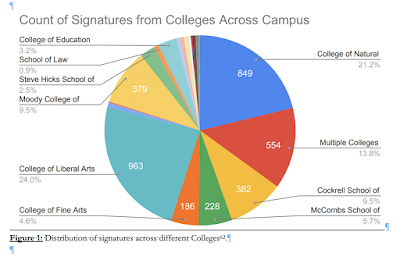 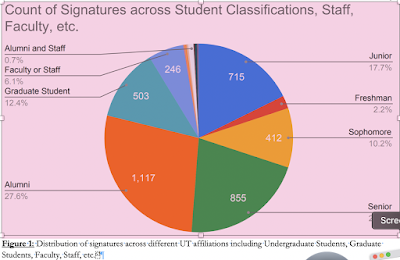