by admin May 3, 2020
In history, we've been learning about the Black Death.
Yep.
Serendipity strikes again. My kids are very aware of contagious diseases and quarantines! 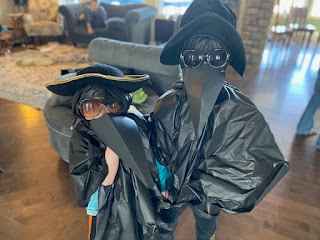 Honestly, it made COVID 19 seem so trivial to study the bubonic plagues. And it spurred me to look at the Spanish Flu, which keeps on getting compared to COVID, and I realized the Spanish Flu was 200 times worse, with 40 million deaths. Also, so far, the death rates for COVID are within WHO's death rates for a typical flu.
Weirdly, that was kind of depressing for me to consider. It made me think "WHY ARE WE DOING THIS!?!" We are headed into another Great Depression because of this social distancing. So many people are suffering financially and psychologically as well. BUT very few people seem to be suffering physically here. Our hospitals are practically empty.
So then I went back to why I was so concerned a month ago. At the end of March, I wrote a journal to myself about the math that I had done about the COVID deaths. I calculated that since there was a 13-14% increase in numbers of deaths every day, that by the middle of June, there would be 10 million deaths, and we would be having a million deaths a day.
That didn't happen. Did social distancing work, or would it have been minimal regardless? I guess we'll never know, but at the end of March, it was prudent to put social distancing into place, and it's much better psychologically to think it worked.
THANKFULLY Alberta has gently been opening things. Yesterday they opened provincial parks (this is ironic because yesterday FINALLY Cardston got its first 2 cases of COVID.)
To celebrate the opening of the parks, we spent the afternoon at Police Lake. Brown, dead, and yet ALIVE, SUNNY, FRESH, WARM, AND NOT AT HOME!!! Thank you Alberta. 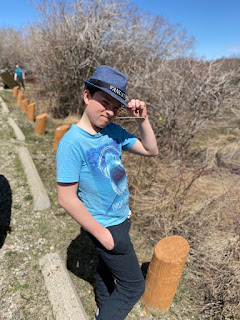 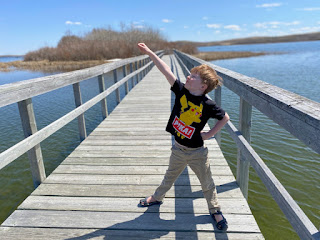 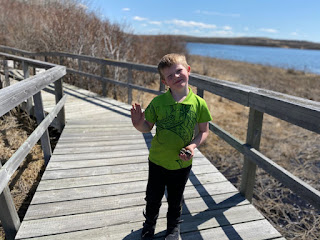 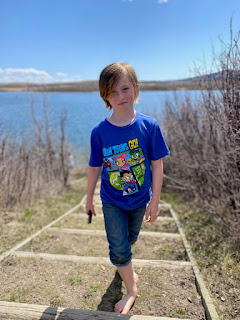 This was Dustin's idea to go to the park. I'm so grateful he's my COVID buddy. He makes life so much better.
Last week I was in a funk (I've had some serious mental hiccups during this COVID  nightmare) and out of nowhere, Dustin asks me "What would be your dream dinner to eat tonight?" I thought that he was just asking because he wanted to make me feel good after all my amazing lunches I make---
Okay, side story: Dustin has always had bad heart burn because of a hiatal hernia, and has in recent years started aspirating on regurgitated acid/food. Yeah, no fun, and a pathway to cancer. Heartburn pills work, but are worse on your body than being an alcoholic.
While we were in Vanuatu, Dustin realized that if he ate a big non-processed/healthy lunch and then no dinner, the amount of problems drastically went down.
That was fine in Vanuatu, where we had someone making all our meals, but I knew I had to step it up when we cam back to Canada. I found our life-changing app: 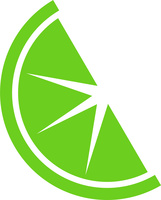 I've always hated to cook, but the main problem was not knowing what to cook and not having the ingredients. This app changes all that. It gives you a very convenient shopping list, and lets you give ingredient preferences (so I can easily make it an alkaline diet,) and the instructions are supper easy, and you get incredible food.
It takes an hour to have lunch now, and that takes away from School, but Dustin doesn't have the time to cook (he used to be the main dinner maker in the house,) and I'd rather have an alive husband than another hour of school. Behold some of my masterpieces: 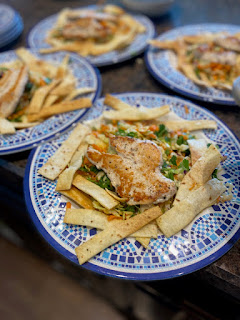 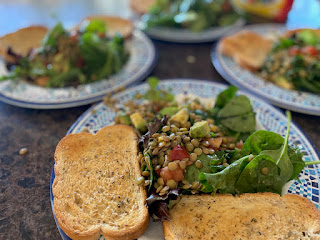 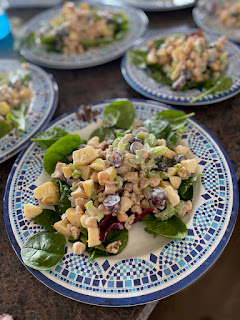 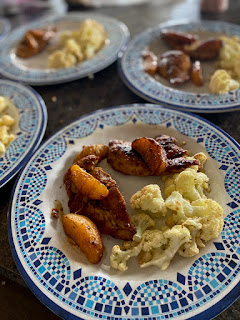 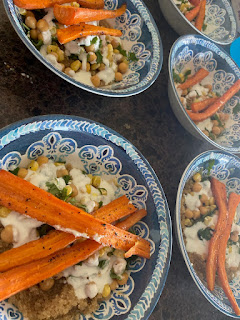 I seriously cook like this EVERY DAY!
Yes---I am THAT wife.
Anyway-back to the point, SO- Dustin asked me what I wanted for dinner. I naturally assumed HE wasn't going to eat (because he doesn't eat dinner, remember.) So I just smiled that he cared about me, and answered "Oh just ramen noodles is fine."
He scoffed at this, and I went off, thinking I was getting ramen noodles. Later I realized that something big was happening in the kitchen. Then, Dustin comes over to me and asks if THAT is what I'm wearing on our date. Umm, I guess not. I get into nicer clothes, put on makeup, and even earrings (you know it's a special occasion when I take the trouble for earrings.)
He escorts me down to our back yard, where the fire is going, the table is set with candles and napkins, and Hyrum comes out to be our waiter. WOW! I am blown away.
THANKFULLY we've been socially stuck with the Smiths who are in our basement (which makes everything more bearable,) and it was a double date.
Dustin had made a multi-course meal that was absolutely incredible. We drank sparkling drinks in crystal and ended it all with a hot tub party.
Bliss. 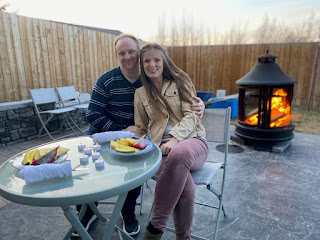 Getting out of monotony is a necessity these days. I realize this whole story has nothing to do with Homeschool, but I don't care. I wanted to tell it.
Okay, back to school history:
We also learned about the Ottoman Empire and made mosaics as our activity: 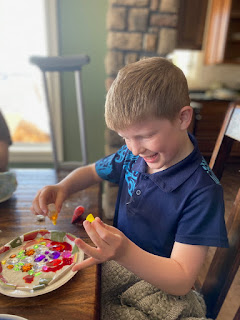 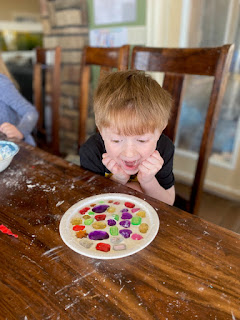 We also learned about Joan of Arc. We actually spent a long time on Joan. We even watched the movie with Leelee Sobieski as part of this, but we never got around to an activity.
The fire of London was another topic we covered with no activity. I had bought sparklers. We already did sparklers for Ancient China. Felt redundant.
It was kind of cool to talk about the Fire of London after being in London. Our hotel was right next to the obelisk that marks the place where the fire started. We read an awesome children's book about the fire, where the main character lives at the tower of London because of his father's work, and we talked about the tower of London, and how we had walked from the hotel to the tower, and how the tower was located etc. It made it all so real and contextual.
Besides history, the main thing we've been doing lately is checklists. As part of this, Daniel has done some poetry. He's done some cute things: 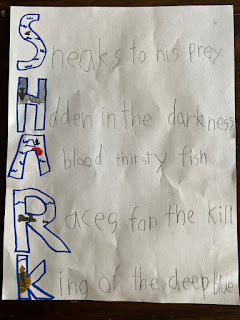 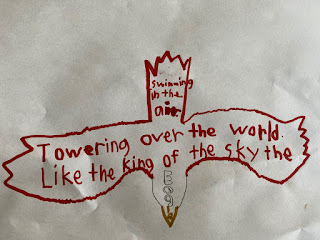 Last week was "officially" spring break, but those type of things never affect us much, but before this, we did our last Westwind zoom classes. Kind of sad. 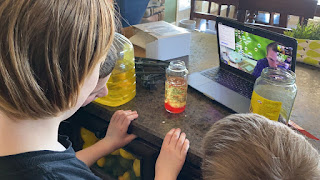 Here they are doing a science lesson.

I'm not too sad we had to cancel my science club. We haven't done one since before Argentina. I'm not sure when we'll learn about the PH scale. I did forget that I haven't given out our crystals we made before COVID. I'm sending them out tomorrow. 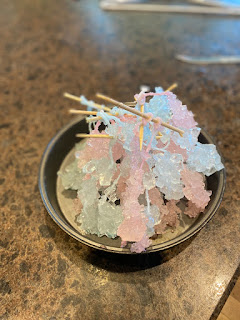 And last but not least, Abraham has been OBSESSED with an imaginary world he's made that is full of "Front Flipping Dinosaurs." There are also "Back flipping Dinosaurs" but I believe they are on a different planet. Anyway, he's always inventing new "facts" about them, and he's been making BrainPOP movies about it, and does art about it, and is ALWAYS thinking about his little worlds. It's pretty cute.
Here's a front flipping dinosaur egg: 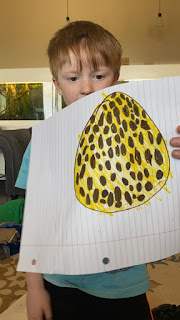