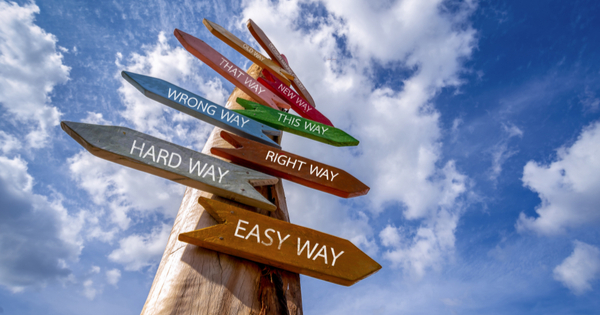 There are two ways to get good at something: the harder way and the easier way. I’ve done both. I nearly mastered the harder way while I was in school. There I had to be good at things, like math and science, which I would have happily avoided if I believed I had a choice. For instance, sitting in my third-grade math class I would have rather played football or watched cartoons or drawn a picture than solved fifteen long division problems. Unfortunately, my choices were: solve the problems or suffer a consequence (specifically, adult disapproval) I had no intention of suffering. So, long division it was.

I quickly learned that if I didn’t resist the math, if I accepted that this is what I was doing now and brought my full attention to it, everything went better. It was easier to find the answers and those answers were more often correct. The more I worked in this fashion, the better I got at solving the equations. I applied this same method to everything I was asked to learn in school. This is how I became a solid B-plus student. Not an A student. That would have required something else of me, which, I believe, had to do with the easier way to get good at things.

Not long after I learned how to multiply and divide, I discovered simulation baseball. These board games allowed me to replay a baseball season using real ballplayers–or, at least, statistically simulated ballplayers. I soon learned I was not satisfied merely recording my Boston Red Sox’s wins and losses, and my players’ home runs and saves. I also had to keep track of batting averages, earned run averages, on base percentages, and slugging percentages. Why? Because it was cool to know exactly how well or poorly the players were doing.

In fact, I found it so cool, I often had as much fun calculating all those averages as I did playing the actual game. At first, I always used a calculator, but I eventually found I could do a lot of it in my head. By and by, I got very good at adding, multiplying, and dividing on the fly, learning to see numbers as groups of smaller integers that could be broken into pieces. There were other tricks as well, some of which I’ve forgotten because I don’t play simulation baseball anymore and there hasn’t been a lot of math in my life for the last 30 years or so.

Playing that game and learning those mathematical tricks could not have been easier. By which I mean, I exerted no effort in doing so. I didn’t have to overcome a desire to do something else, to harness my attention like some horse that wished to run free. Interest and action and outcome were all in alignment. My ease came from an internal motivation, rather than an external one. It was my idea to play the games, and it was my desire to find those averages and percentages. Nothing about those games was done to please anyone or achieve anything. I was just having fun.

I will sometimes hear people say success isn’t easy, or happiness isn’t easy, or marriage isn’t easy, or just life itself isn’t easy. I certainly understand why one would believe this is so. I have paddled my boat against the current of my own pleasure, have created mountains of achievement I needed to climb. While I struggled and strove, I told myself that all my effort and hard work was proof that I was headed somewhere, that I wasn’t lazy, that my life had meaning, all the while hoping one day I will have worked my way to some happy place where no more effort was required, where I could just be.

To this day, I remain a little surprised that the easy way, the effortless way, is always the best way toward anything–particularly success. When I’m on that path, I can think of no better place I want to be. I don’t need anything; I don’t want to prove anything or achieve anything or gain anything. This is contentment, which I had long perceived as the end result of my labor, rather than a lifelong guide for my travels.

The post The Easy Way appeared first on The Good Men Project.