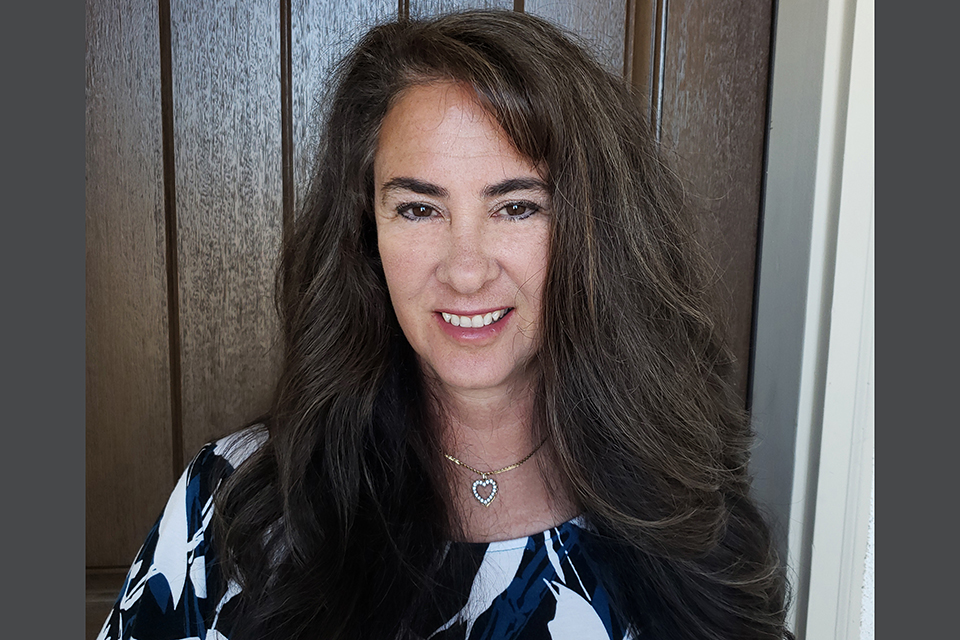 A reporter doing a story on Clark Magnet High School teacher and CSUN alumna Dominique Evans-Bye asked one of her students to describe her.

“It’s true,” said said Evans-Bye ’95 (Environmental Biology), M.S. ’12 (Geographic Information Systems). “I do things my own way. I make a mess, my equipment is everywhere. I’m in the way, but this is because I put my students first. I don’t have a lot of storage room at school. I’m bouncing between three different rooms, teaching four different subjects, so I have to improvise.”

Different has worked for the biology and geography teacher, so much so that in the Fall of 2019 she was selected as a recipient of the Presidential Award for Excellence in Science, Mathematics and Engineering Mentoring. The honor is one of many in the career of a teacher whose enthusiasm for her work and creative application of knowledge, technology and tools has made her a standout figure in Los Angeles County’s educational system.

Evans-Bye didn’t initially want to be a teacher. Instead, she said, teaching chose her. And CSUN teachers helped in that choice.

“I give a lot of credit to the opportunities CSUN provided,” Evans-Bye said. “I took full advantage of CSUN’s programs.”

Evans-Bye said because she is the curious type she took more classes at CSUN than were required for her to earn her bachelor’s degree.

But one class, in particular, she said, was the door-opener to so many things in her life.

“What really changed my life at CSUN was the scuba diving class,” she said. “I loved marine biology. I loved the ocean and wanted to scuba dive, but my mom was overprotective and wouldn’t allow it. Once I saw the class at CSUN, there was no stopping me. I signed up, made a lot of dive buddies through CSUN, and we dove every chance we got.”

The CSUN scuba instructor used past students as TAs for the course. Evans-Bye was recruited to be a TA, but she realized that she needed more training to handle the responsibility. She got all the class TAs together and convinced an associate CSUN scuba instructor to start a rescue/divemaster scuba class for the group. Later, she followed in the footsteps of her mentors and took the LA County Underwater Instructors Certification Course to become a scuba instructor herself. This led to her also becoming a volunteer public safety diver for the Ventura County Sheriff’s Department.

Shortly after earning her bachelor’s degree, she began teaching scuba at a sporting goods store and one of her co-workers, who was also the principal in charge of opening the new science and technology magnet high school, encouraged her to make use of her biology degree and teach children. Evans-Bye started by teaching at Roosevelt Middle School in Glendale. She laughs recalling her early days in the profession.

“I was thinking going into it, ‘I’m so passionate about biology and about science that these kids have to be interested. With my enthusiasm, they’ll love it.’ And I was just amazed they could care less what I had to say,” she said.

After two years, she moved over to Clark Magnet High School in La Crescenta in 2000 and began to blossom.

What makes Evans-Bye’s teaching different, said her new Principal and fellow CSUN alumna Lena Kortoshian, is, she has always been ahead of the time.

“Dominique has been doing that from day one since she’s been a teacher,” said Kortoshian ’88 (Math – Secondary Teaching), ’91 (Credential), M.A. ’98 (Educational Administration). “Students learn. They do the inquiry on their own. And then she is a role model for them. They look at Dominque like a mentor.”

Evans-Bye developed a three-course GIS program at Clark Magnet, writing curriculum for classes: Geology of Disasters, Honors GIS & Remote Sensing, and Honors Environmental GIS. She introduced project-based learning, allowing her students to choose an environmental issue to investigate and then design a project around. Many of the projects have been entered into and won competitions.

Over the last 13 years, Evans-Bye’s teams have earned about $500,000 in prize money from the Lexus Eco Challenge — a national STEM contest for grades 6-12. Students receive 70 percent of the money, 20 goes to the school and Evans-Bye gets the remaining 10. She also wrote a grant with a student that earned her school $100,000.

For her innovative work, passion for her job and ultimately the influence she has had on her students, she has been honored with numerous awards.

She received the California Geographical Society’s Distinguished Teaching Award in 2014 and was named Los Angeles County Office of Education Teacher of the Year in 2017. She has also won two extraordinary national honors.

In 2013, she was recognized with the Presidential Innovation Award for Environmental Educators and this past fall she was a recipient of the Presidential Award for Excellence in Science, Mathematics and Engineering Mentoring, earning her a trip to The White House.
“She looks for opportunities all the time to make students work hard and harder and prepares them for college and careers, and even life,” Kortoshian said. “We’re very proud of her.”

Recently, her students were given a project based on one of Evans-Bye’s real-life experiences.

Last September, the Ventura County Sheriff’s Department called on her to help in rescue and recovery efforts after the dive boat Conception burned and sank off the coast of Santa Cruz Island, a tragedy that resulted in 34 deaths. Evans, who has continued to volunteer for the department since her days at CSUN and has served as its research-and-development officer for nearly a decade, operated a remotely operated vehicle (ROV) aboard a rescue and recovery ship on the day after the tragedy.

Evans-Bye, preparing her students for the potentially critical work that they might have to do in a career, later brought some of the mapping data into the classroom at Clark Magnet. Using a GIS analysis application, the students turned the data into a story map.

The CSUN alumna who didn’t want to be a teacher has consistently brought new ideas into the classroom to satisfy her own curiosities, inspire kids and elevate them. She takes a lot of pride in doing things out of the norm. But she takes pride in something greater.

“I do it my own way,” she said. “And I’m successful, but more importantly my students are successful.”