U. fetes class of 2020 in first-ever virtual ceremony 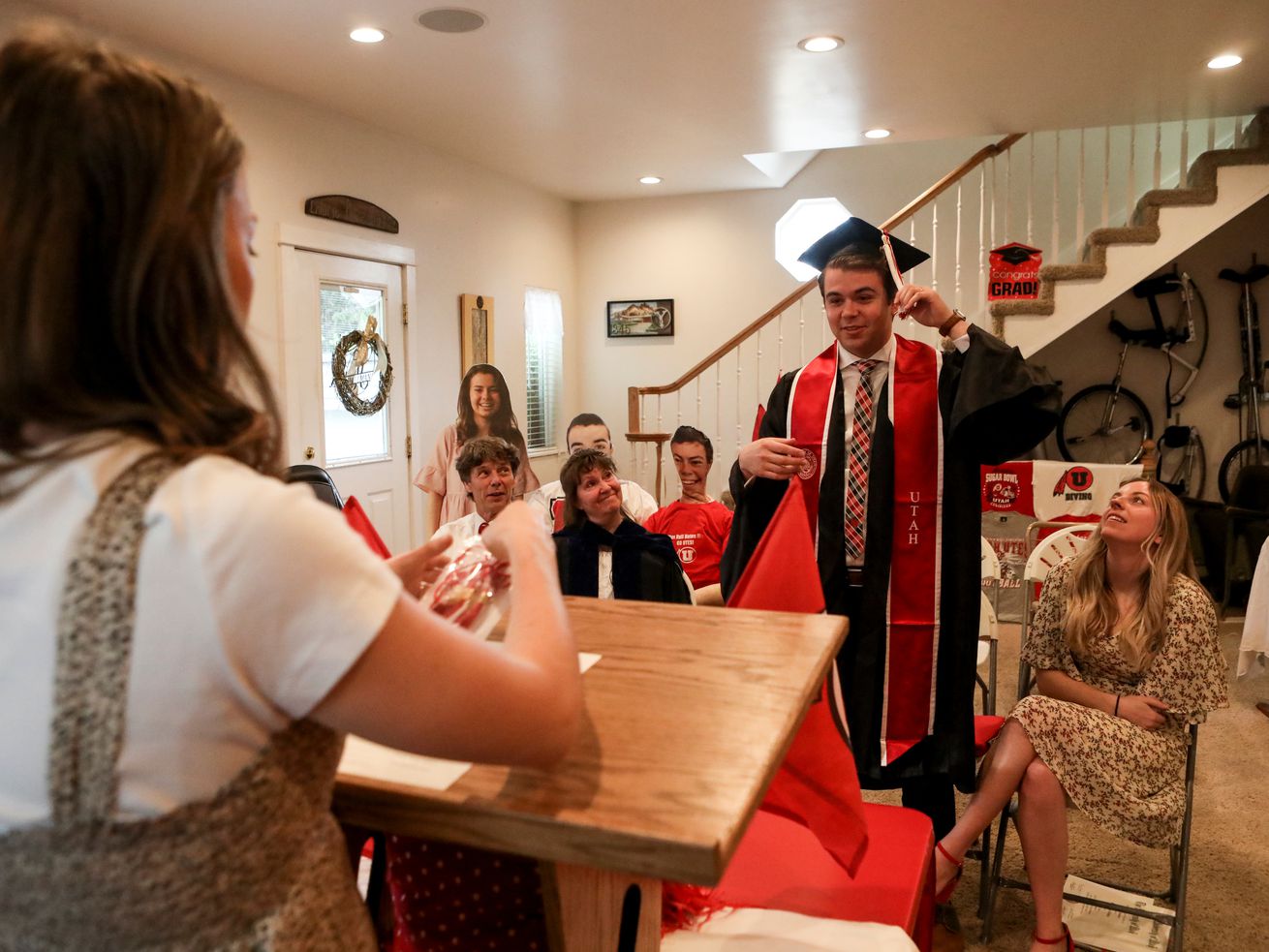 Ceciley Hallman Herod directs her brother Joseph Hallman to turn his tassel during a mock commencement ceremony in their parents’ Sugar House home amid the COVID-19 pandemic on Thursday, April 30, 2020. Hallman earned bachelor’s degrees in Latin American studies, Spanish and international business with an emphasis in trade commerce in 2019 with hopes of walking during the spring 2020 commencement ceremony. | Ivy Ceballo, Deseret News

‘The rest of your life is not a spectator sport. Your job in life is to be an active player, to make the world a better place,’ commencement speaker John Warnock, co-founder of software giant Adobe, tells grads

SALT LAKE CITY — When John Warnock was in 10th grade, his high school counselor told him his aptitude test indicated he was good at working with his hands.

Even after telling the counselor that he wanted to go to college and perhaps study engineering, the counselor told Warnock he had no knack for anything technical and he should plan to pursue something else.

“I think he suggested that I should become a cheese wrapper,” said Warnock, who in 1982 co-founded the software giant Adobe, considered the industry leader in electronic imaging, publishing and graphic arts software. Adobe employs more than 17,000 people worldwide.

After high school, Warnock earned three degrees from the University of Utah — a bachelor’s degree in mathematics and philosophy, a master’s in mathematics, and a doctorate in computer science.

On Thursday, Warnock delivered the commencement address during the university’s first-ever virtual graduation ceremony, carried at utah.edu/live and KUTV.com. In-person rites were not possible due to the coronavirus pandemic but the university has planned college and department convocations in December.

“His approach was really quite simple. He instructed us to pick up a college-level textbook for algebra, solve every problem in the book, then move on to the next subject, trigonometry, and do the same. And after that, go on to analytic geometry. By following his advice and solving a lot of problems, my grades in math and all other classes improved, and I went from C’s to A’s and B’s,” Warnock said.

Forty percent of Warnock’s classmates in Barton’s classes went on to earn advanced degrees, he said.

“The whole experience taught me teachers have an enormous effect on their students. I hope in your educational experiences you have encountered great teachers and mentors,” said Warnock, a member of the National Academy of Engineering and a fellow of the Association for Computing Machinery.

Warnock said in the past 50 years he has observed and experienced changes in informational technology that “have been totally unpredictable and quite frankly, mind-blowing. Things that were thought to be impossible have materialized over the years.”

Things like the internet, which has Utah roots. he said. The U. was one of 15 renowned universities and research labs that had Advanced Research Projects Agency contracts. The agency was started during the Eisenhower administration in response to the Russians launching the Sputnik satellite.

The research at the U. was led by David C. Evans, founder of the U.’s computer science department and Warnock’s doctoral thesis advisor.

In March 1969, the principle scientists and the Advanced Research Projects Agency administrators met in Utah at the Rustler Lodge at Alta for their annual meeting. Evans, co-founder of Evans & Sutherland, a pioneering firm in computer graphics hardware, invited Warnock to attend.

During the meeting, the research administrators agreed they needed much better communication to share their research and results among the research centers.

“The changes over the coming years will probably be much greater and even more consequential for all of our lives. To manage this evolution, the world needs an educated and informed populace. Today, you are being honored and have earned the right of becoming part of that group,” he said.

Warnock told the U.’s 8,628 graduates that now that they have earned their degrees it is their job to keep up and keep going.

“The rest of your life is not a spectator sport. Your job in life is to be an active player, to make the world a better place,” he said.

“We should look to the innovators and inventors and learn how they explore and deliver the future. Focus on how you can make a difference with your life.” — Adobe co-founder John Warnock, U. alumnus and 2020 commencement speaker

One such person was awarded the University of Utah’s honorary doctoral degree, Dr. Kristen Ries, a professor emerita of internal medicine and retired infectious diseases physician who was at the forefront of treating patients in Utah at the height of the HIV/AIDS epidemic.

After earning her medical degree from Drexel University, where she also completed her residency, fellowship and spent two years as a faculty member in infectious diseases, Reis joined the Indian Health Services at Rosebud, South Dakota, and cared for Lakota Sioux. She also served in the National Health Service Corps.

Ries moved to Utah in 1981, arriving the same day the Centers for Disease Control and Prevention released a report about a new infectious disease affecting gay men. To start, Ries worked for the FHP health care system as the head of adult medicine and then as a physician at Holy Cross Hospital, where she created Utah’s first comprehensive HIV/AIDS program.

Among the graduates was Sabrina Baldassari, who earned a degree in mathematics and minor in English. Starting this fall, she will teach high school math.

Baldassari said she was somewhat disappointed not to march in a graduation procession because she is the first child in her family to graduate from college and family from out of state had planned to attend.

“It’s kind of a bummer not being able to celebrate with everyone,” she said.

University of Utah President Ruth V. Watkins acknowledged the graduates’ disappointment that they did not get to march in the traditional commencement procession.

“This is not the commencement you anticipated all the years you were working hard on your degrees and it is not the joyous celebration we wanted to give you. But let me be clear about what matters: It is not the pomp or the unusual circumstances we find ourselves in. What matters is this, you did it, you set your eyes on the finish line. You worked hard and steadily. You persisted in an unprecedented situation to reach your goal. That is fortitude. That is character,” Watkins said.

She added, “We are so proud of the resilience and determination you have shown, a remarkable achievement in any year, but even more so this spring. You truly deserve all the accolades and praise we can give you in this unsettling and unbelievably challenging moment.”

Sophia Vitale, who graduated in psychology and pre-pharmacy, said she plans to attend pharmacy school at the U. next fall so that should give her the opportunity to participate in an in-person convocation in December.

Vitale said she would have preferred to walk with her class this spring but she understands why that was not possible.

“I feel like it’s a little disappointing but honestly, props to the university for putting the effort in to make it special for the class of 2020,” said Vitale, who has attended the U. along with her siblings. She’s one of a set of triplets. Their older brother will graduate next year.

“Obviously the safety of the students, the faculty and families of students is important. It’s understandable they would do such a thing. I think it’s nice they made the effort to do something,” she said.

The broadcast included shoutouts by U. alum and NFL quarterback Alex Smith, Utah Jazz center Rudy Gobert, Gov. Gary Herbert and Salt Lake City Mayor Erin Mendenhall, who is also a U. alumnus, among others.

Student speaker Miranda Stewart, graduating with sociology and international studies majors, also touched on the pandemic in her address.

“As new graduates, we expect to be in a position of uncertainty about the future, but none of us could have expected that this occasion would call for the individual and collective strength that it now has,” she said.

Stewart likened her higher education experience to what she observed caring for a small cast of hermit crabs during childhood.

“One of the coolest things about them to me was the fact that, throughout their lives, they’re constantly changing their shells. The shell-changing process sounds simple. A hermit crab grows until it begins to feel tight and uncomfortable, and then it leaves that shell to find a new one that fits better,” she said.

However, being without a shell is stressful and dangerous for hermit crabs. “Until a crab finds a new shell that can accommodate its growth, it is vulnerable,” she said.

Stewart said she has, at times, felt like a hermit crab, much so when she attended college as a freshman at another university.

“But over time, new experiences and realizations caused me to grow, and I began to feel uncomfortable in that same old shell. But where I was, I was not allowed to leave it. That shell was the one I had been accepted in and unless I wanted to endure some pretty serious backlash, it was the only one I would be permitted to wear,” she said.

Stewart said she tried to keep herself small “but I couldn’t suffocate forever.” So she risked the vulnerability of living without a shell “until I could find one that would hold the version of me into which I had grown. Long story short, that is why the University of Utah is held so dearly in my heart.”