Yes, I Hear the People Sing 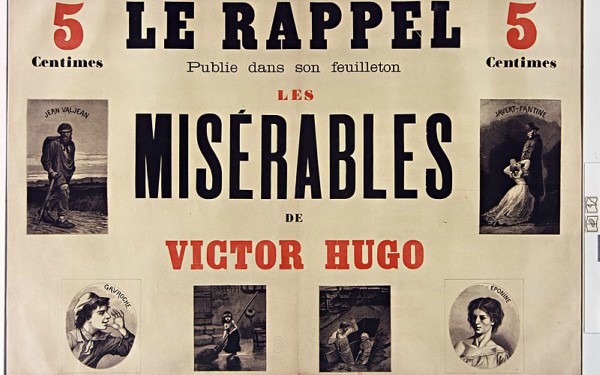 Victor Hugo was one of the prominent literary figures of the nineteenth century.  His writing provides a scathing social critique while also presenting the hope for a brighter future.  Cameron Mackintosh, the producer of the musical version of this novel, recognized the power of Hugo’s writing and adapted the novel Les Misérables as a Broadway musical.  The combination of literature and music that came about through Mackintosh’s adaptation resulted in one of the longest running Broadway musicals of all time.

I was also fortunate enough to share the epic scope of the finale of the Broadway show with my English 492 class, which ultimately reveals how there is, indeed, hope for a better tomorrow.  In Victor Hugo’s Les Misérables, and in its subsequent Broadway adaptation that Cameron Mackintosh produced, Hugo utilizes the final two chapters to suggest that the pain and suffering within the present moment can dissipate with the passage of time, and the musical exhibits that same idea through a powerful finale.

In order to understand the profound nature of the finale of Victor Hugo’s masterpiece, I must provide some reflection on my interest in this novel.  Part of the reason why I did my presentation on this particular literary work, and its subsequent musical adaptation, is because I am a Francophile.  When I was younger, I was fascinated with French culture and had dreamed about traveling to Paris.  In fact, right before I started high school, I yearned to learn the French language, which is what I had studied for four years of my life.
During that same time period of my life, my French teacher showed the class a televised version of Les Misérables in order to engage the class with one of the most famous literary works ever written.  I still remember feeling pity for Fantine as she was forced into prostitution.  Even though the characters endured dire circumstances, I still felt as if they had the ability to cope.  Ultimately, my interest in French culture taught me valuable life lessons about the misery that does exist in the world in spite of the glamorized portrayals of French culture found in media.
Victor Hugo’s novel does more than just evoke pity from readers because it reminds them, including myself, about how life is a precious gift.  For example, within the novel, as Jean Valjean approached his death, he told Cosette and Marius to “Love each other dearly and always” (1431).  The significance of love holds great importance because that is one of the central themes of the novel.  Jean Valjean agreed to care for Cosette, which taught him to learn how to love.  Additionally, love is prevalent in the novel in spite of the suffering that many of the characters face.  Hugo presents the idea of death as not a punishment, but a way to alleviate suffering.
In fact, the last few words that Jean Valjean speaks remind Marius and Cosette that death is inevitable.  Specifically, Jean Valjean expresses “almost inarticulate words [that came] from his mouth: ‘It is nothing to die; it is frightful not to live’” (1428).  Furthermore, people can only live for so long, which means that it really “is frightful not to live” (1428).  In a way, Jean Valjean really did live because he achieved a sense of human dignity by loving a child that was not his own.  In the end, the journey that Jean Valjean undertakes reminds readers that life can happen only once, and that it up to them to embrace life itself.
The finale in the musical also reminds me to stay positive rather than stagnate in despair.  I had suffered from personal issues while growing up, and I had oftentimes felt isolated because of the emotional pain that I had experienced for a major part of my life.  For example, I had been a victim of bullying as a teenager because I had trouble with my math classes.  I also felt depressed because I yearned to be among the popular students in high school.  In a way, I hated myself in the past because I did not receive that much attention when it came to how people at school would treat me.  I still remember students lacking faith in my ability to succeed in school and in life.  I also felt embarrassed about receiving several rejection letters from numerous universities in California.  To put it simply, I felt like a loser.

Nevertheless, the rapturous beauty associated with the finale of the Les Misérables musical encourages me to take the initiative, and to willingly change my life for the better own my own.  For example, the lyrics, “Somewhere beyond the barricade / Is there a world you long to see?” (The Complete Libretto), relates to my personal desire to do what I want to do with my life in spite of the discouraging comments that people have given me in the past.  The characters in the musical did their best to revolutionize France because of social oppression.  I personally felt downtrodden in the past, but my attempts at doing my best to enjoy life has made me the happier person that I am today.  I understand that I have limitations, but I am still able to live in a way that works for me.
Additionally, I sometimes do take minor risks in order to explore what the world has to offer.  I obviously do not do dangerous stunts, like swimming with sharks, but sometimes I do take small risks, such as tasting foreign food that I never had before.  The small risks that I try to take regularly allow me to engage myself with what the world has to offer.  In fact, performing a cyclical routine can actually be very bland, but trying something new each day helps me enjoy the life that I have.  Doing those actions also help develop my personality because fixating on one or two topics might make me appear shallow.  Instead, exploring new possibilities allows me to broaden my horizons so that I know that I had actually lived rather than wallow in self-pity.
Victor Hugo’s novel also explores the precious value of life itself.  Within the scholarly article entitled, “What Really Matters,” by Bishop Anthony, he asserts, “Les Misérables’ heroes demonstrate that redemption is pure gift from God” (28).  Seeking a personal sense of dignity helped Jean Valjean find peace at the end of his life.  In a way, he was blessed with being able to learn to love others, especially Cosette, Fantine, and Marius.  I also believe that part of the reason why Les Misérables is a classic that resonates with people is because it offers them a sense of hope in spite of the harshness of reality.  Bishop Anthony also appropriately titled his scholarly essay, “What Really Matters,” because the novel and the musical both teach the respective audiences to treasure what really does matter in life.  In a general sense, some people might be so preoccupied with material possessions and trivial matters that they become superficial.  Instead, the ideas of redemption and religion both interconnect within Hugo’s novel to create a seminal work of French literature.  Jean Valjean felt as if God had blessed him by the end of the narrative, and he obtained salvation at the end of his life by learning to care for others instead of simply himself.  Both the novel and the musical also compels audience to examine what really does matter in life, such as the importance of family, and note taking life for granted.  Hugo’s text and the musical also encourages people to embrace life itself even though all people are limited human beings.  People might have limitations, but they can still be grateful for what they have.  Some people might not believe in God or any other example of religious figures, but they are still capable of being who they are as long as they remember that each of their lives is a special gift.
Returning to my presentation, I must admit that I enjoyed sharing my adoration of musical theater with my class.  I have to also say that I have been blessed with the opportunity to watch performances of some of the greatest musicals ever made.  For example, I have seen both the stage version of The Phantom of the Opera, and the musical film adaptation, when that particular film was released in 2004.  Additionally, I have seen Wicked at the Pantages Theater in 2007.  An interesting correlation that exists between Les Misérables, The Phantom of the Opera, and Wicked is that each musical has a protagonist who is essentially an outcast.  For example, Jean Valjean was a criminal who broke his parole, the Phantom was a disfigured musical genius, and Elphaba was a misunderstood girl who eventually became the notorious Wicked Witch of the West.  I can definitely relate to the idea of being an outcast because I was not the best student when I was in high school.  The one truth that I knew for sure, though, was that I used my interest in musical theater to help me cope with the pressure associated with adolescence.
When I was a teenager, I did not enjoy interests that were similar to my peers.  I enjoyed classic films while some of my classmates would have preferred more current forms of entertainment.  I developed an interest in musical theater because I felt as if singing could alleviate stress as well as allow people to express themselves more fully.  I was also very daring when I was younger when I chose to sing and dance during class presentations while other students would have been more monotone.  Musicals have given me great joy because they teach me to be bold.  They also inspire me to follow my heart because I would listen to soundtracks that include songs about being oneself, such as the song “Defying Gravity” from Wicked.  In the end, musicals help me cope with daily stress because I would cheer for characters who would occasionally sing about despair, but achieve a sort of resolution by the end of a musical production.  I am sure that I will find a solution as well even though challenges might hinder my chances for success.

Les Misérables is a work of literature that has affected generations of readers ever since it was originally published during the nineteenth century.  Its universal themes of love, hope, and redemption remind people that there is still hope for a better tomorrow.  In fact, my presentation revealed how a literary work can combine with music so that the themes of the novel resonate with an even larger audience.  Additionally, some people might be illiterate, and would not be able to understand the themes that Victor Hugo explores in his novel.  In contrast to the limitations of written text, music has the ability to go beyond what people can write because music is like a universal language.  Finally, music and literature both interconnect because they both serve the purpose of communicating ideas.  Language barriers might inhibit the transmission of messages, but people can still hear the sounds associated with music so that they can at least have an idea of what another person might try to convey.  Ultimately, music can take a foreign piece of literature, and express its ideas in a way that profoundly affects the mind and the heart, much like how Jean Valjean dynamically changed into a more fully-realized person by the conclusion of Les Misérables.

The post Yes, I Hear the People Sing appeared first on The Good Men Project.