We sat down with Anthony Katz, Hyperice Founder and President to discuss the launch of the new percussive device (he hates the term “massage gun”) and the brand’s current stage of evolution on its mission of making top-notch recovery mechanics accessible and portable.

The overall goal? “We want to put this device in as many hands as possible,” said Katz.

We’ve tested a lot of massage guns here at SPY, including Hyperice’s original GO massage gun. This new version of the gun is more ergonomic and comfortable to use. It also, to be frank, looks gorgeous, and reminds me of an Apple product with its sleek, monochromatic, Arctic Grey exterior.

Don’t let the beautiful design fool you, though, this massage gun packs a punch along with everything else Hyperice makes. I was given the change to review the brand new gun and was not disappointed in the slightest. The improvements from the previous gun are subtle, but noticeable, and make it an even more worthwhile device than its predecessor. Check out my full review below alongside excerpts from my interview with Katz. You can also find my thoughts on the rest of Hyperice’s complete line of massage guns here. 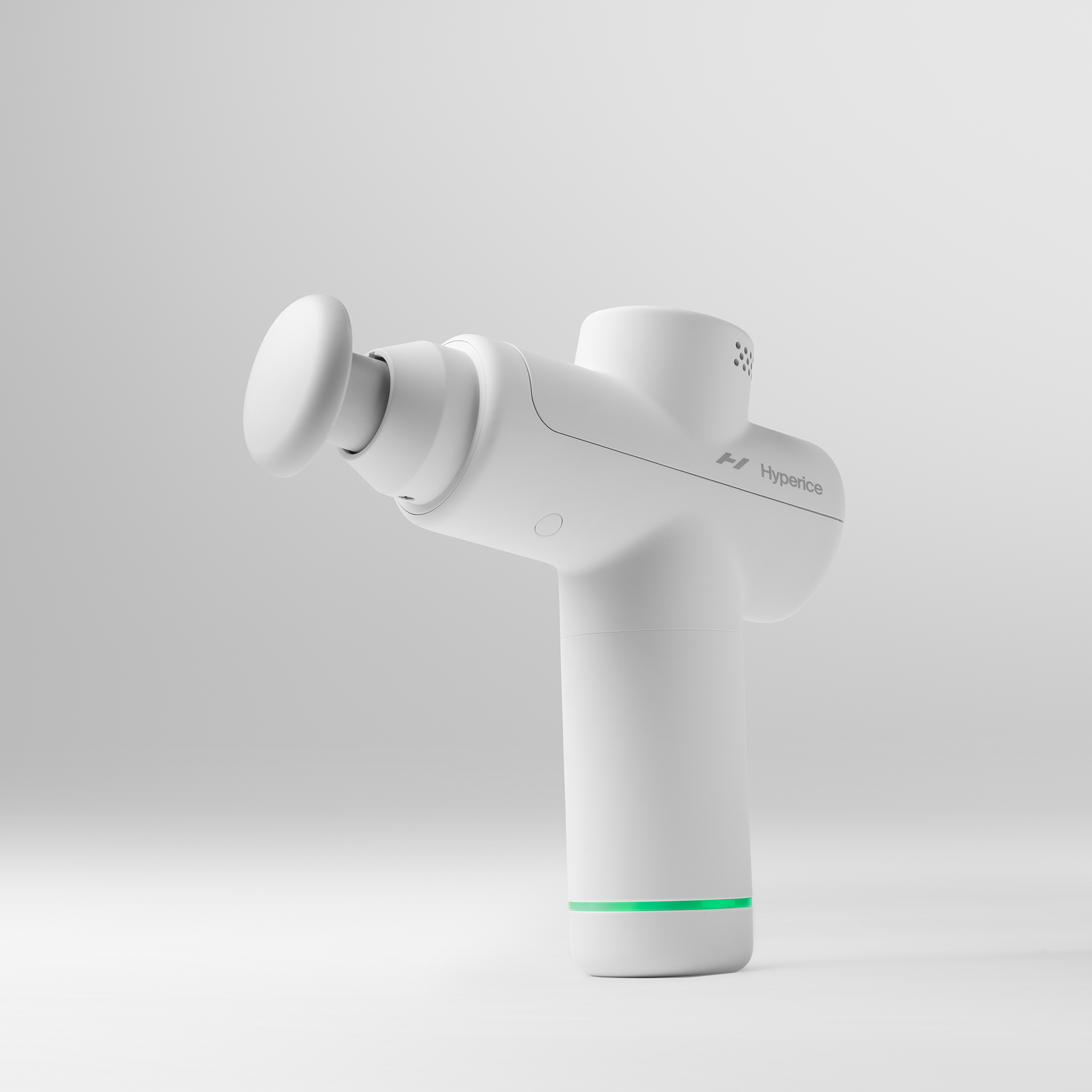 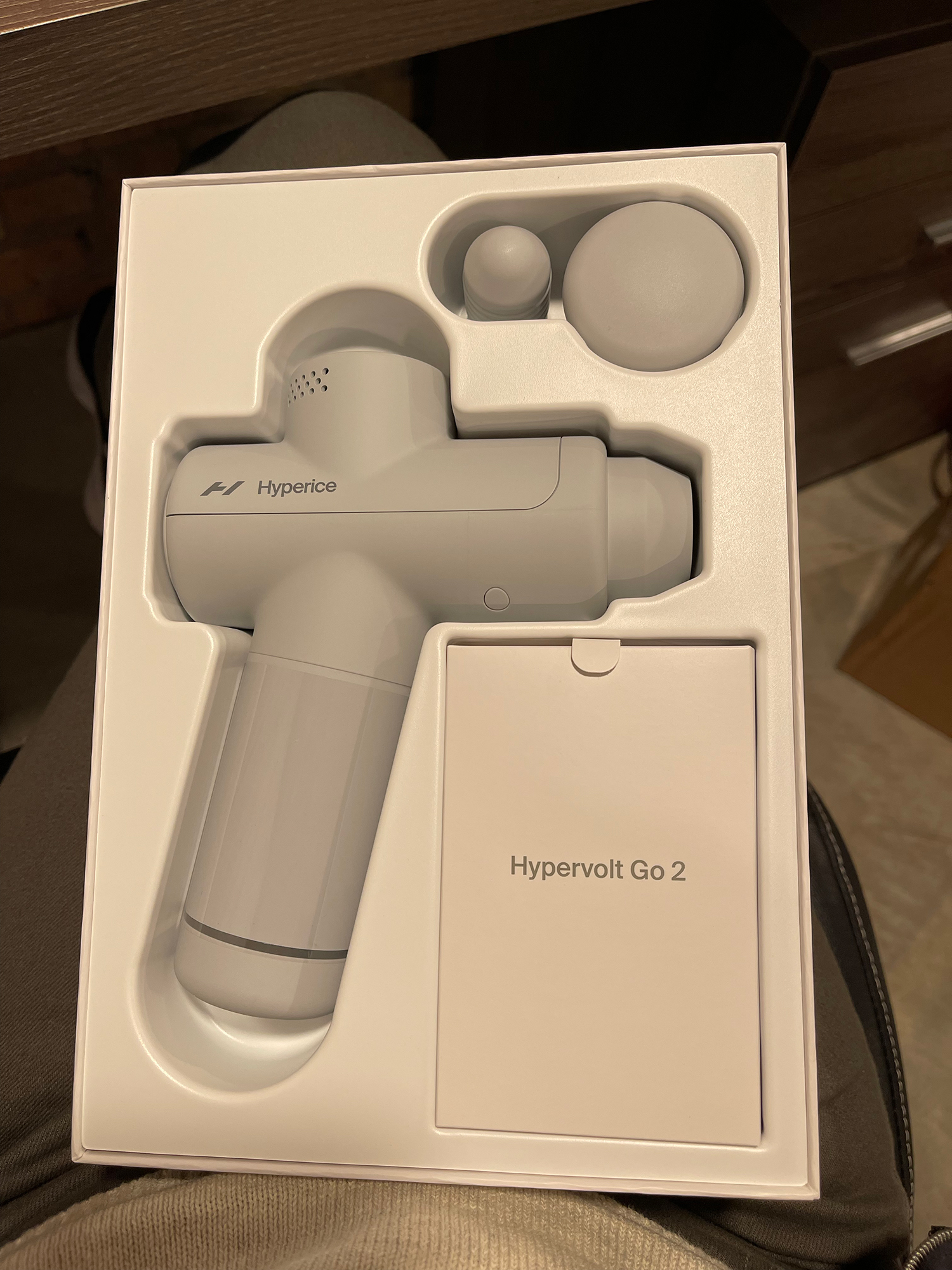 The Brand New Hypervolt GO 2: An Evolution in Accessibility and Portability

“We got into percussion all the way back in 2014. Percussion devices used to be used only by therapists and they were much bigger, more expensive, the first percussion device was $3,000. And we had the second one ever and it was also $3,000,” said Katz.

“My whole vision for Hyperice was to take things that were native to the sports training world or that more professional athletes were using and saying ‘let’s democratize them.’ And Apple-ize them,” said Katz. Much in the way Apple made a computer a device widely used and relevant to people’s lives, as opposed to a giant processor hidden away in a closet somewhere, Hyperice makes technical therapy equipment something you can use on the couch, on a plane or at your desk.

“When we came out with the Hypervolt 1 it was $350 and a lot more accessible for a lot of people. One of the things we realized was it wasn’t just therapists buying the Hypervolt it was everybody, it was people who were active like everyday people were buying it,” said Katz.

So, the Hypervolt GO 2 is their second edition of their most portable massage gun, a gun designed to be more affordable, smaller, but no less useful. “The idea was let’s make it small so people can take it anywhere, let’s make it quiet so when you’re watching TV it’s not disruptive. And then obviously offering it at a price that’s $150 less than our original Hypervolt. That expands the landscape, right?,” said Katz. They definitely succeeded in all three of those areas of improvement. 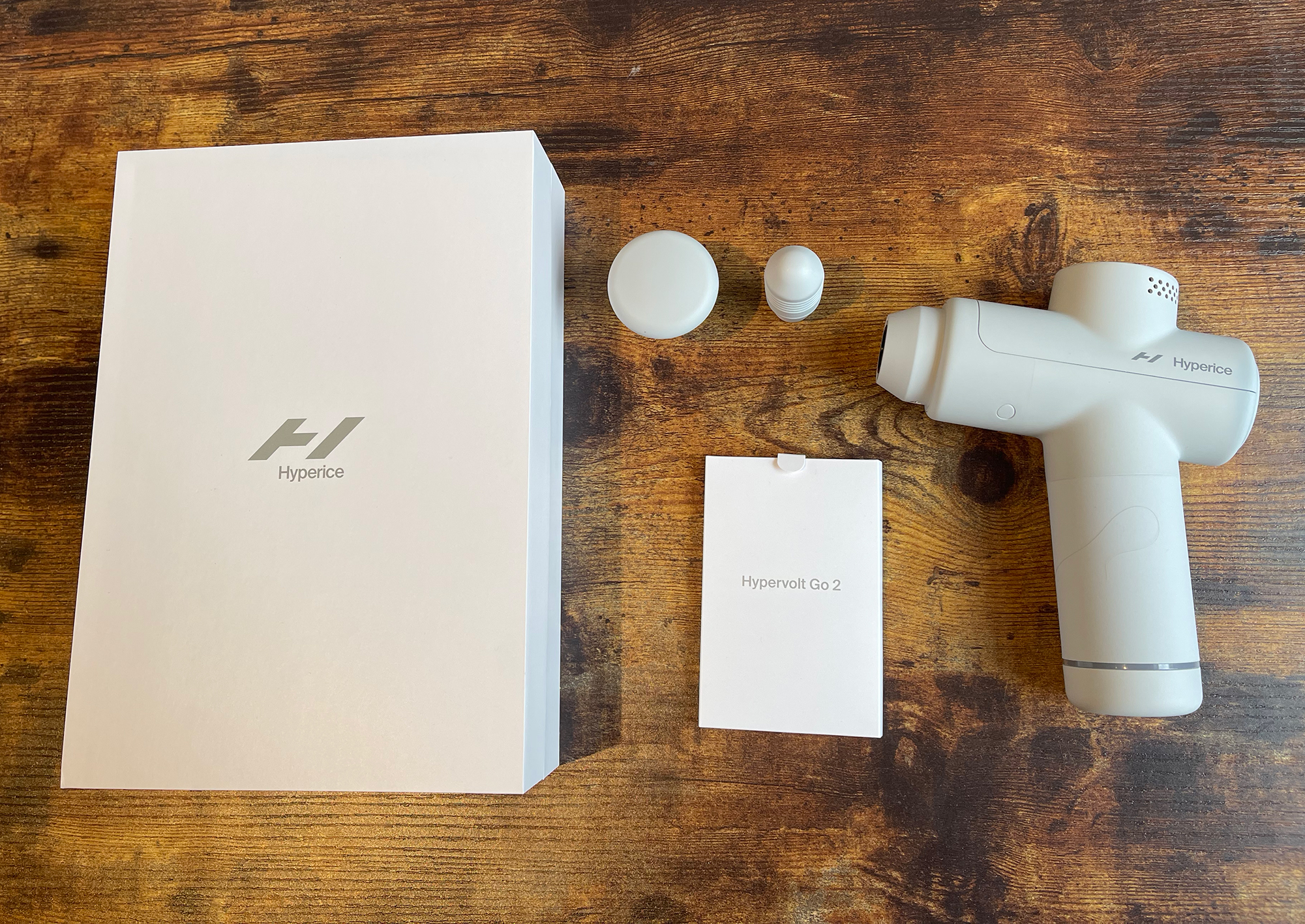 We have a standard set of criteria for all of the massage guns we review at SPY, including the entire Theragun massage gun line and the 20+ guns we tried for our official round-up of the best massage guns of 2022. Each gun is judged and compared to each other based on the same objective and subjective benchmarks. This includes a round-up of general specs we gather about each gun and more subjective material you can only gather once you’ve held the device in your hands.

Here’s what we look for when reviewing massage guns like the Hypervolt GO 2:

I’ll take you through my thoughts on all of the above, and deliver a final verdict at the end regarding whether or not you should buy it. After a few weeks of testing, I’ll tell you I’m thoroughly impressed by this device, and if you were interested in the original Hypervolt GO, you’re probably going to like this one as well. 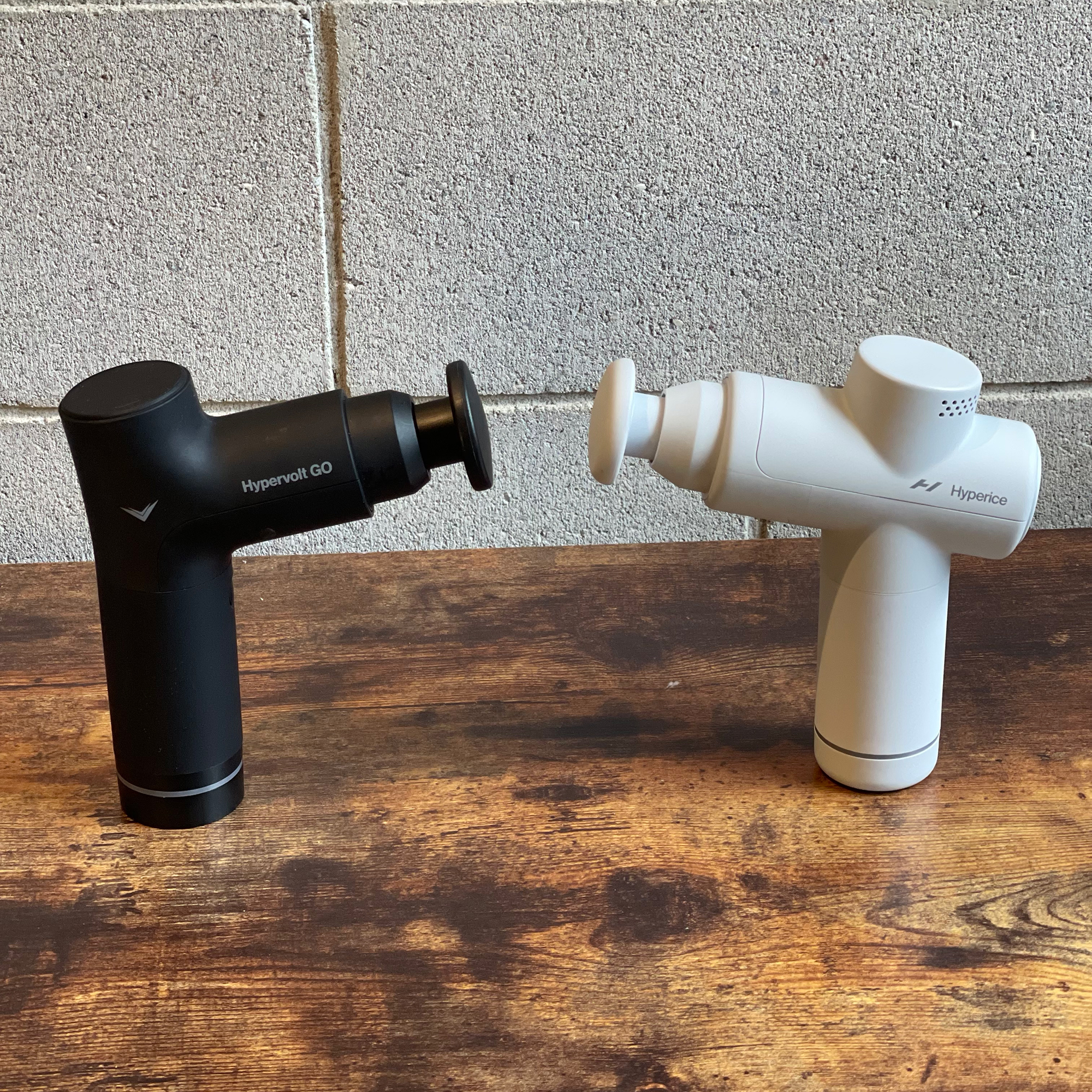 My initial impressions of the Hypervolt GO 2 were that it looked beautiful right out of the box, and was definitely easier to hold and more user-friendly than the first GO model. Katz noted that with original GO was all about taking their original Hypervolt gun and making it as small and movable as possible. With the second version of the GO, they’re keeping the portability, but making it easier to use.

“There was a huge focus on making it more ergonomic, because we felt that with the GO 1, the GO 1 was all about size, small as you can. The GO 2 is about size but with better ergonomics,” said Katz.

Hypervolt GO 2 At a Glance:

Specs-wise, it’s neck and neck with the original Hypervolt GO, which we ranked as the best portable massage gun of 2022. They share many of the same mechanical features, like their battery life, motor power, included massage gun heads and speed ranges. After using the two guns, side by side, on my same sore quad, I couldn’t feel a huge difference on behalf of my muscle. However, design-wise, from a user experience perspective, the GO 2 is definitely an improvement when it comes to the ergonomics and operation controls. 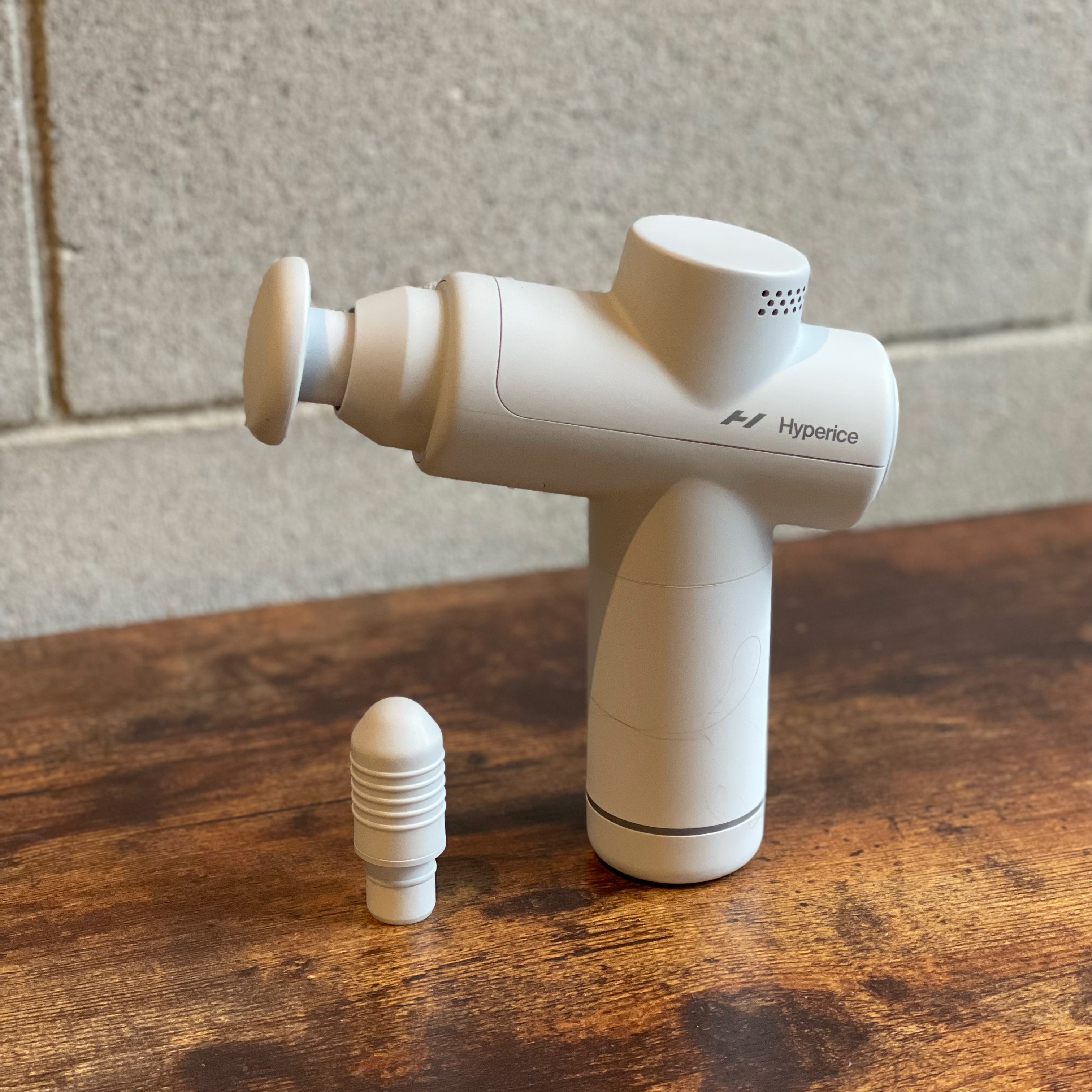 Hyperice founder Anthony Katz walked us through the upgrades they made to the GO 2 model, and how much care and detail went into the ergonomics of the new machine.

“One of the key design features was the slanted handle, I don’t know if you notice but if you go grab it your hand falls into place really naturally. More so than the first one. So improved ergonomics, there was also a big focus on the materials and finishes. The matte Arctic Grey, the soft coat paint, when you touch it and feel it it feels very premium,” said Katz.

It’s true, the Hypervolt GO 2 is definitely easier to grab and hold than the original Hypervolt GO, and the weight distribution feels more user-friendly. It’s also a thicker device overall, which makes it feel more powerful while maintaining a compact size that’s ideal for travel and movement. I actually thought it was shorter than the original GO, because of the thicker body that’s easier to hold, but they’re the same height and weight.

The biggest improvement, in my opinion, is moving the on/off and speed button to the back of the upper wing of the gun. On the original Hypervolt GO, the button is at the top of the handle, underneath the massage gun head. This made it a little bit difficult to turn on and off, and there was no way to know which speed you were on. The stripped down design of the gun, especially when compared to Hyperice’s other guns, made sense, but it wasn’t the most user-friendly way to go it.

The Hypervolt GO 2 has drastically improved this element, with an easy-to-see and easy-to-use button on the back that’s your on/off switch and speed switch. There’s also a small light that denotes which speed you’re on. You do still have to scroll through all the speeds in order to turn the gun off, an annoying feature, but one that’s common across the entire product category. 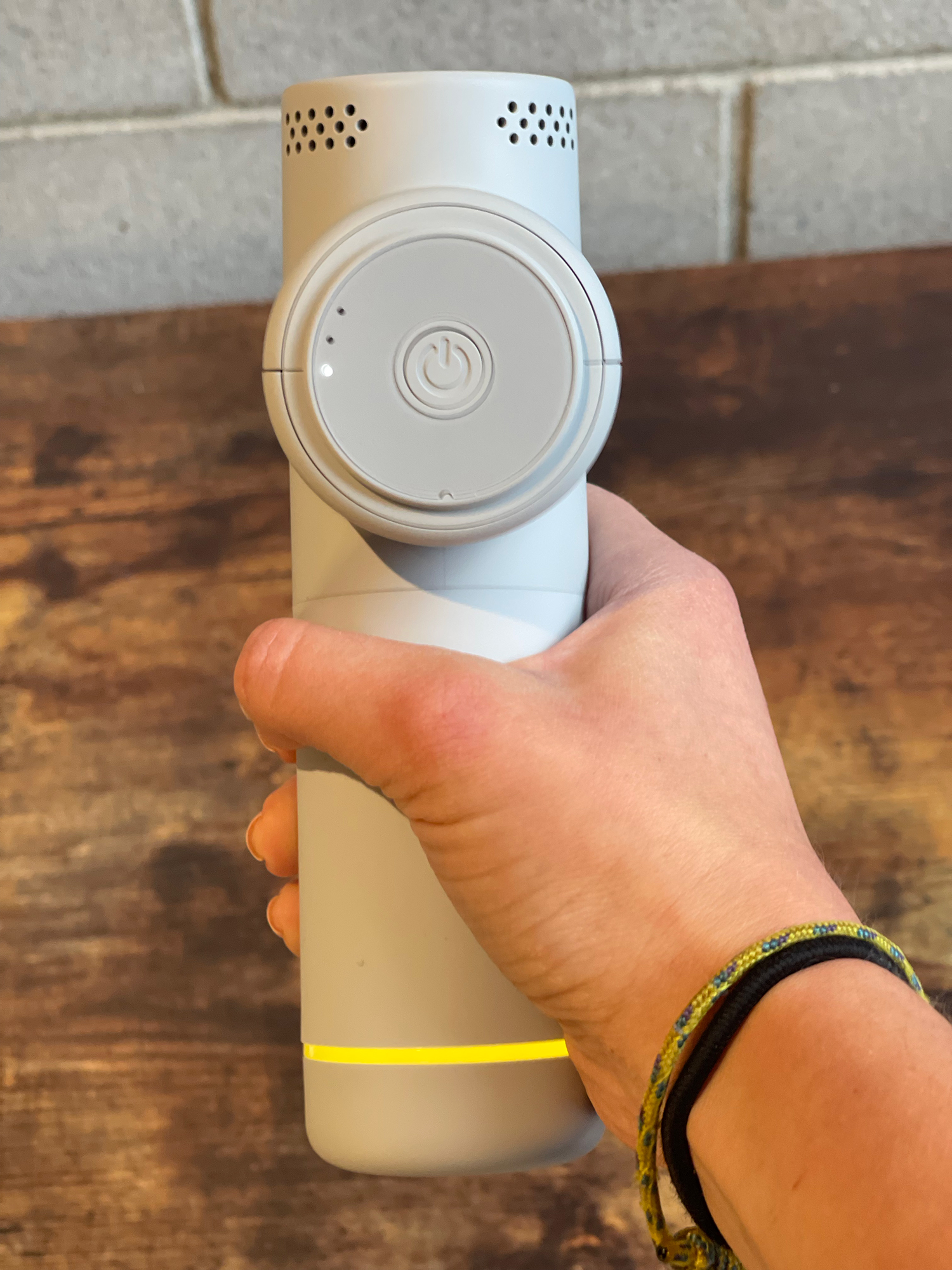 I want to take a moment to appreciate Hyperice’s battery life indicator, which is common across all of their percussion devices. Each gun has an LED light ring around the bottom of the handle that lights up when you turn it on, and lights up in a certain color based on the battery level of the gun. Green, yellow or red alerts you of how much battery life you have left, and was pretty accurate during our testing. No other massage gun brand has a feature like this one, that’s so easy to see and immediately recognizable, and it drastically improves the user experience.

This massage gun is very quiet, even on its highest setting. I don’t believe I’ve tested a gun that’s this quiet and powerful at the same time before. The motor feels powerful, and I can definitely feel a difference in my muscles before and after using it, but it isn’t nearly as loud as some of the larger massage guns I’ve tried. As I’ve noted in my previous reviews, there’s definitely a correlation between the power of a massage gun’s motor and the amount of noise it makes. The deeper your massage gun can go, the louder a noise it’s going to produce.

However, this massage gun doesn’t make you sacrifice noise for power, or vice versa, as much as other guns do. It’s a smaller, more compact machine, so you’re not going to get the same treatment as you would with the Theragun PRO, but most people don’t need that. Most people need a machine like this one, with three simple speeds, an easy one-button design and a compact shape they can fit into their backpack or suitcase. Oh, it’s also TSA-friendly. 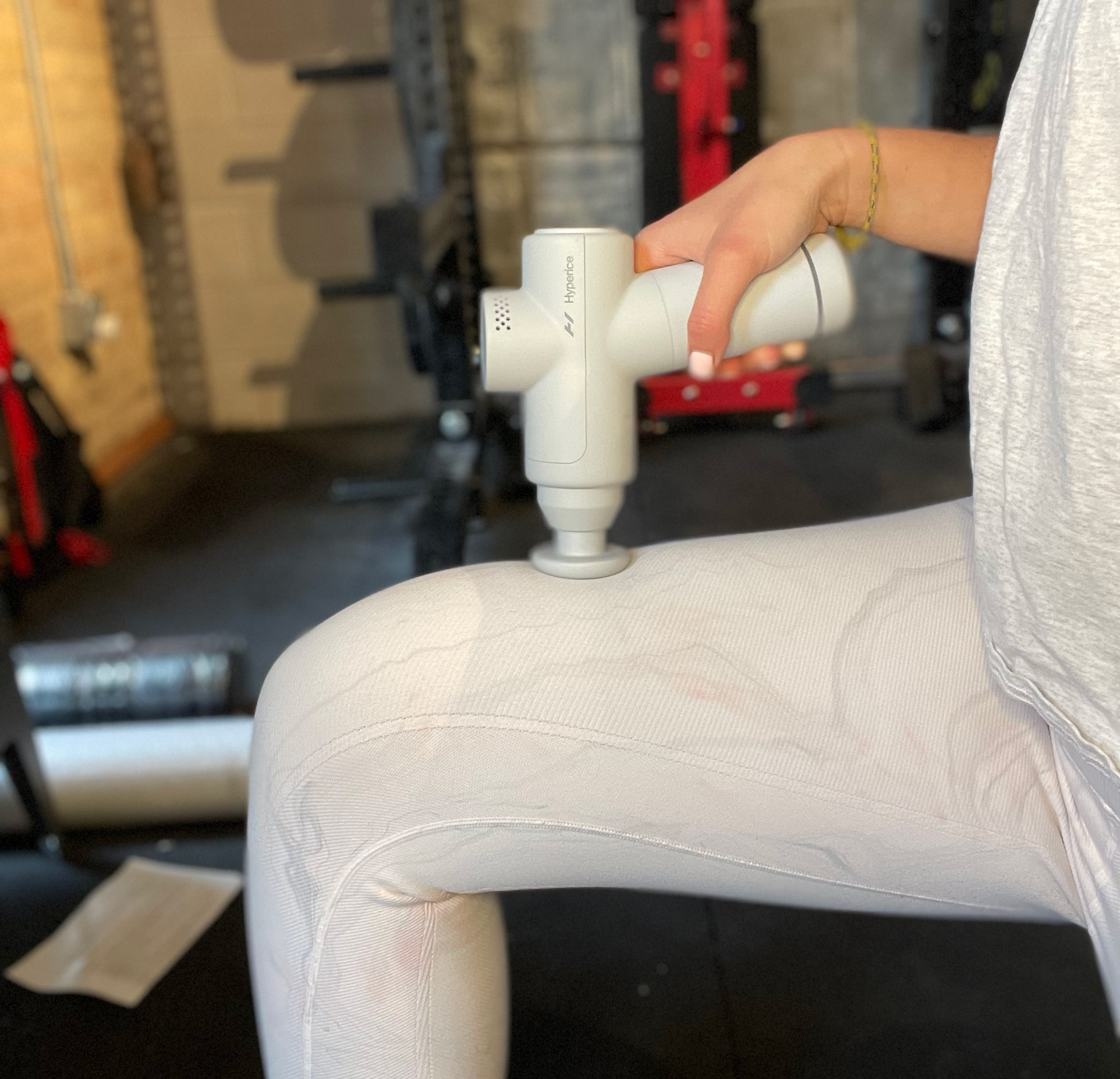 You don’t need to sacrifice power for portability with the Hypervolt GO 2.

Hypervolt GO 2: Should You Buy It?

My answer is a resounding yes. This is one of the best-designed massage guns I’ve ever tested. It’s beautiful, very easy to use, quiet and effective. It’s a smaller model that doesn’t feel tiny, and doesn’t only hit pressure points like mini massage guns do. It’s a well-crafted machine that a lot of thought and time went into, and it shows.

Almost anyone will find this massage gun useful.

I plan on keeping my Hypervolt GO 2 at my desk and using it when my muscles need a little jolt of energy at the end of the long workday. I definitely recommend making the investment, especially if you’re looking for value from a top-rated brand that’s known as an authority in the space.

There are, however, a few minute things I wish were different about this gun. You can only really hold it in one way, by the handle with your forefinger on top and thumb wrapped around it. After using the ergonomic multi-grip that Theragun has, this feels limiting, but is by no means a dealbreaker.

Hyperice also doesn’t include storage cases with their massage guns. This would be fine, as I hate the large bulky cases some guns come with, but with two massage gun heads knocking around something to hold them would be nice. I’ve also found that switching out the massage gun heads takes some extra care, as they easily pop off if you don’t install them carefully and forcefully.

Should You Buy It? Yes.

If you’re interested in massage guns, are an active person or are looking for a more portable percussive device, you should purchase this one. 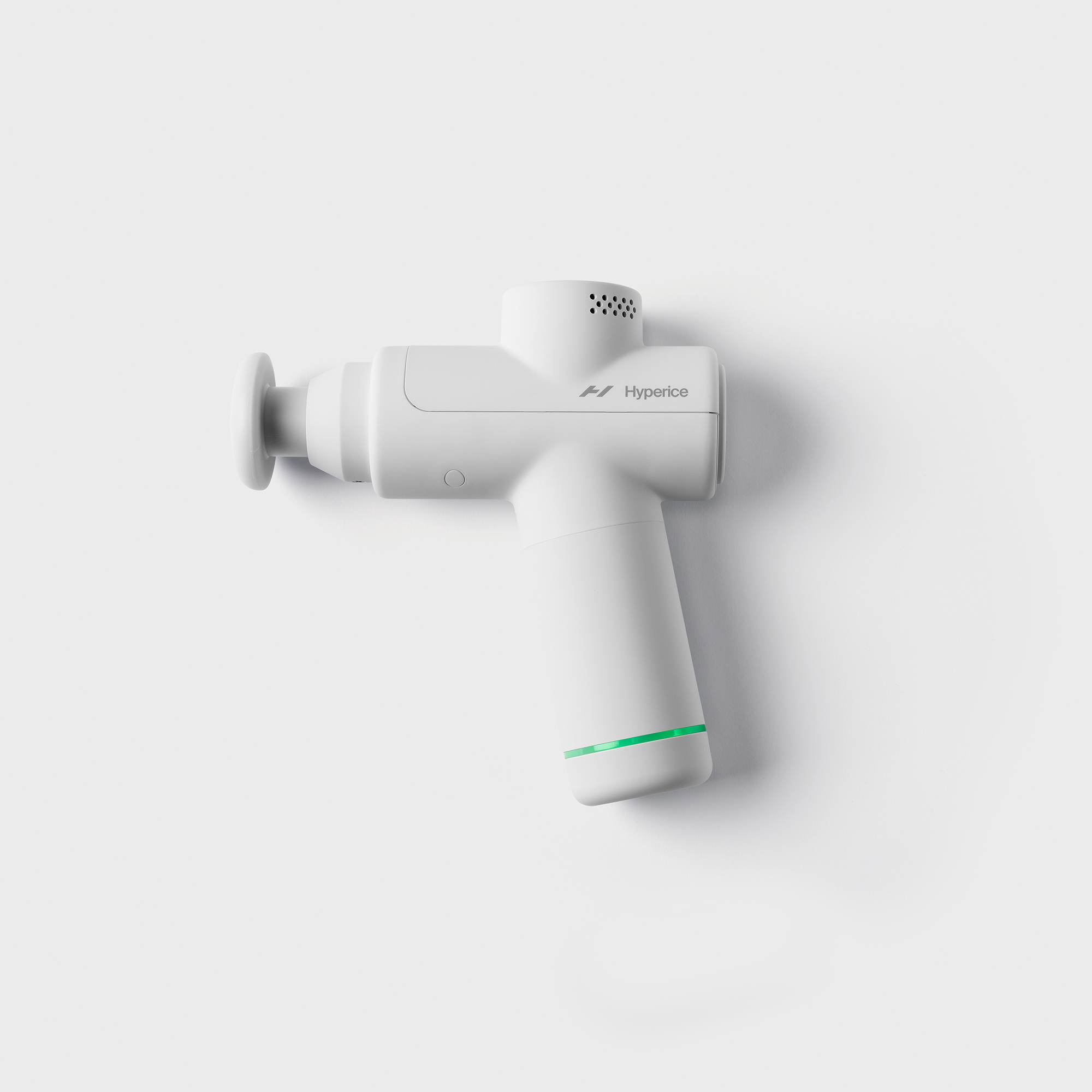