Over the past few weeks, Ive had the opportunity to try out the Jackery Explorer 500 Portable Power Station. With a solar generator available at an additional cost, the Explorer 500 should come in very handy during power outages or when camping. 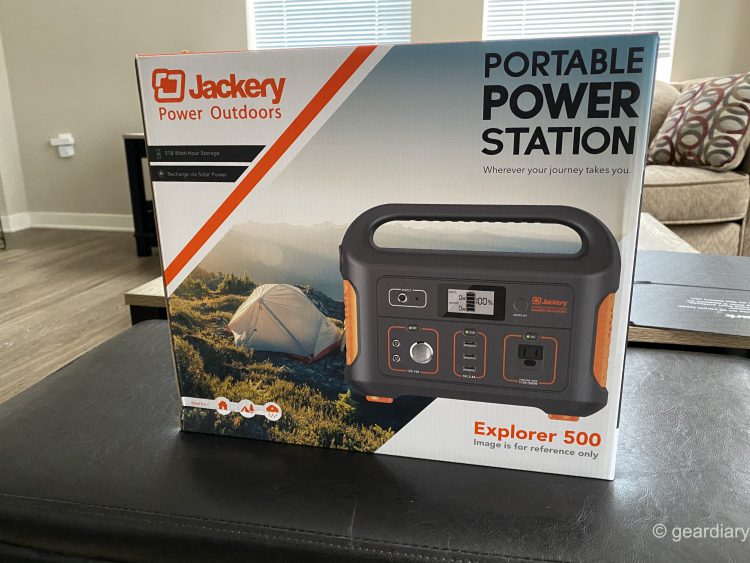 Complete with a rechargeable 517Wh lithium battery, the Jackery Explorer 500 is one of the lightest yet portable battery-powered generators of its kind. Designed to take a beating with its rugged design and the black and orange colorway, the Explorer 500 is the same size as most Bluetooth speakers that you would see at a cookout or BBQ. Its designed to be able to be portable in a car or to just use stationary in your houses; there are many uses cases for the Explorer 500.

For example, my grandmothers home is older, and frequently the electricity cuts out if theres bad weather. While the Explorer 500 wouldnt power up her entire home like a backup generator, she can easily set it in her bedroom or living room, connect her iPad and iPhone and get through the night with its more than capable battery.

It weighs only 13 pounds, which is something my grandmother said she underestimated when I initially showed it to her. In terms of dimensions, its 11.8 X 7.6 X 92. inches, allowing it to be stowed away in a closet, next to a nightstand, or in her case, right by the front door.

Jackery states that it can charge an average smartphone over 34 times, a Tablet over 28 times, a laptop over seven times, and in the event that you needed to power a mini-fridge, you could keep it cool for up to eight hours. This might be a bit naive of me, but I would just keep my fridge closed in the event of not using it during a power outage, but not everyone thinks this way. My wife, as well as grandmother store insulin, so the Jackery would be a necessity in this situation. 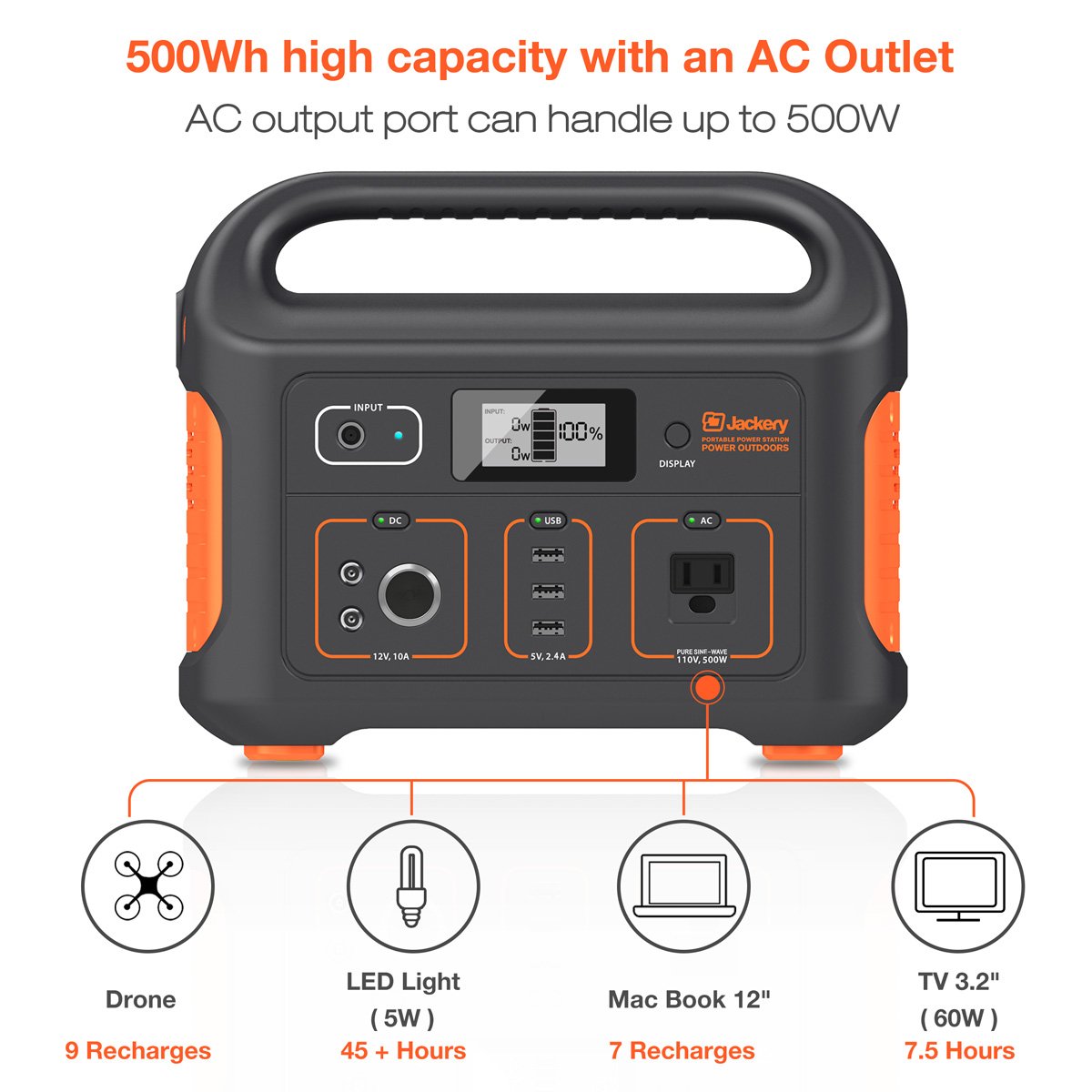 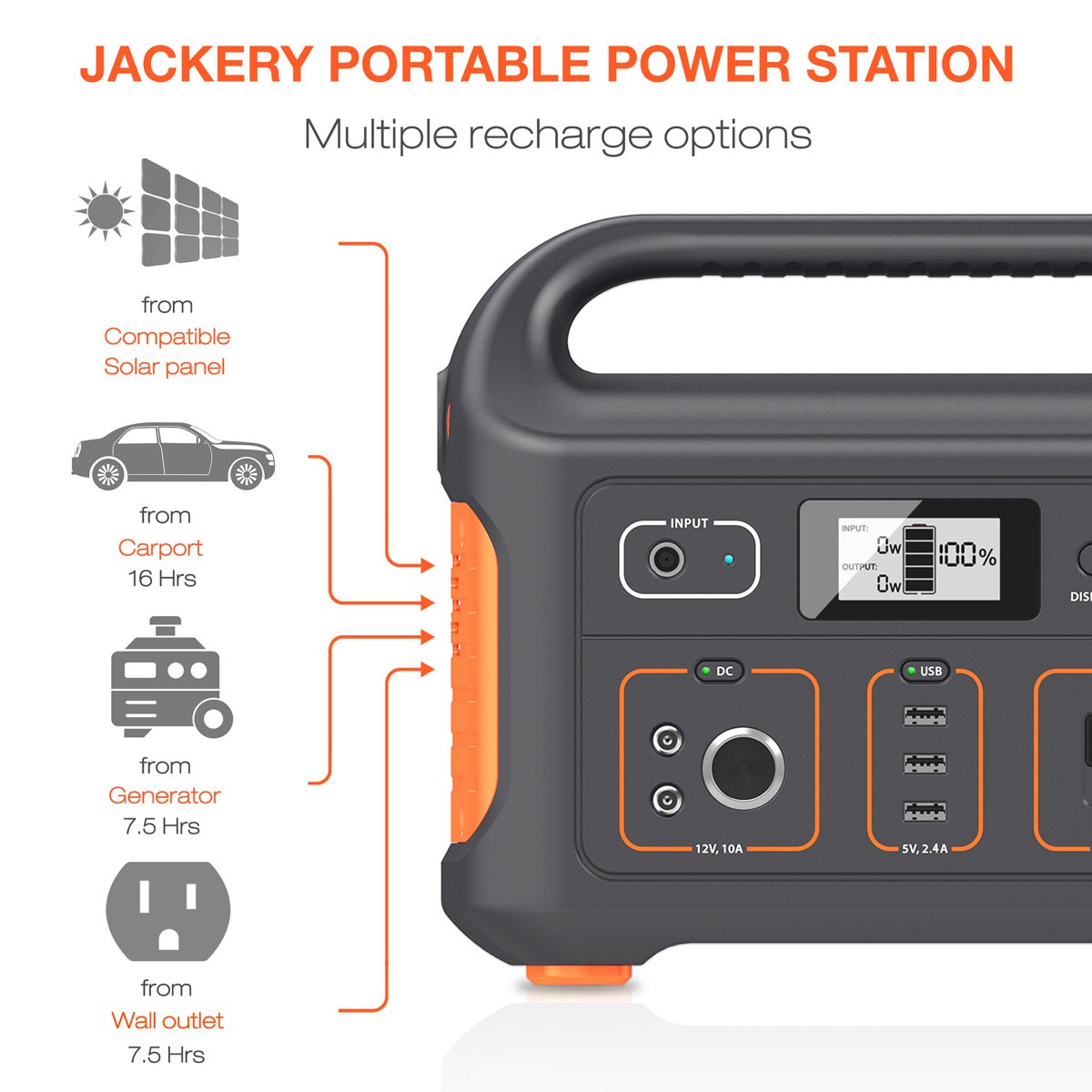 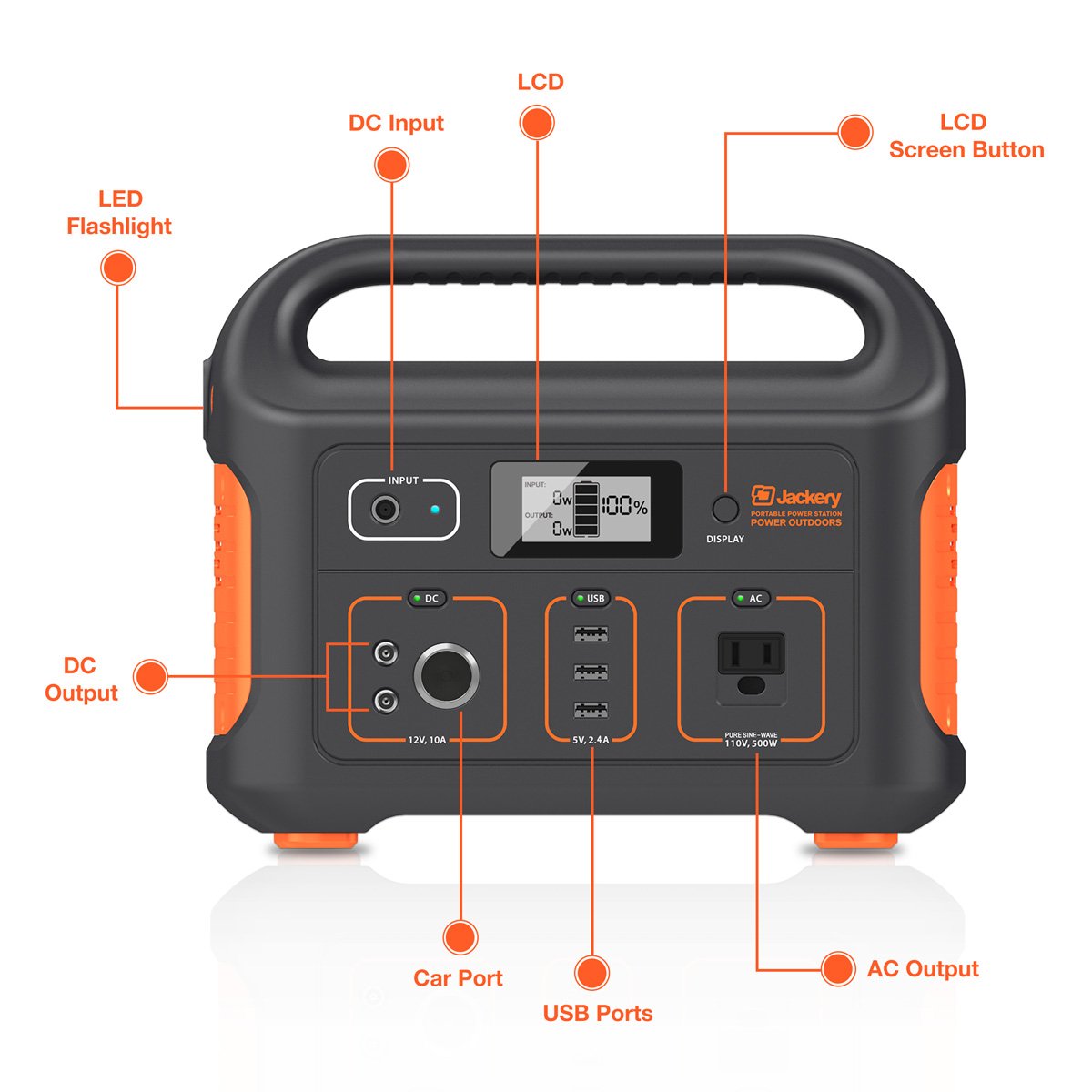 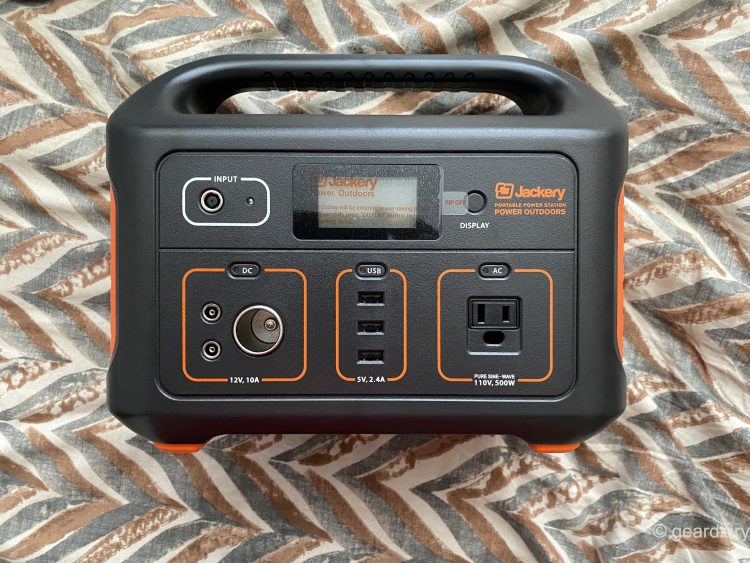 But the business end is obviously the front portion of the Jackery. Complete with an LED screen that shows you the battery percentage remaining, the display shows you the input and output of what is being charged. To the left of that is a DC Output for your car which can give 16 hours of battery life when the Explorer 500 is fully charged. This is particularly helpful for those who are fans of the outdoors, giving sustainable power for a camping or hiking trip. In the center, youll find three individual USB outlets. I will say I was a bit disappointed that there was no USB type-C port here, however; all three have 5 volt 2.4amp outputs which seem to be about standard (in other words, there is no quick charge here, folks). 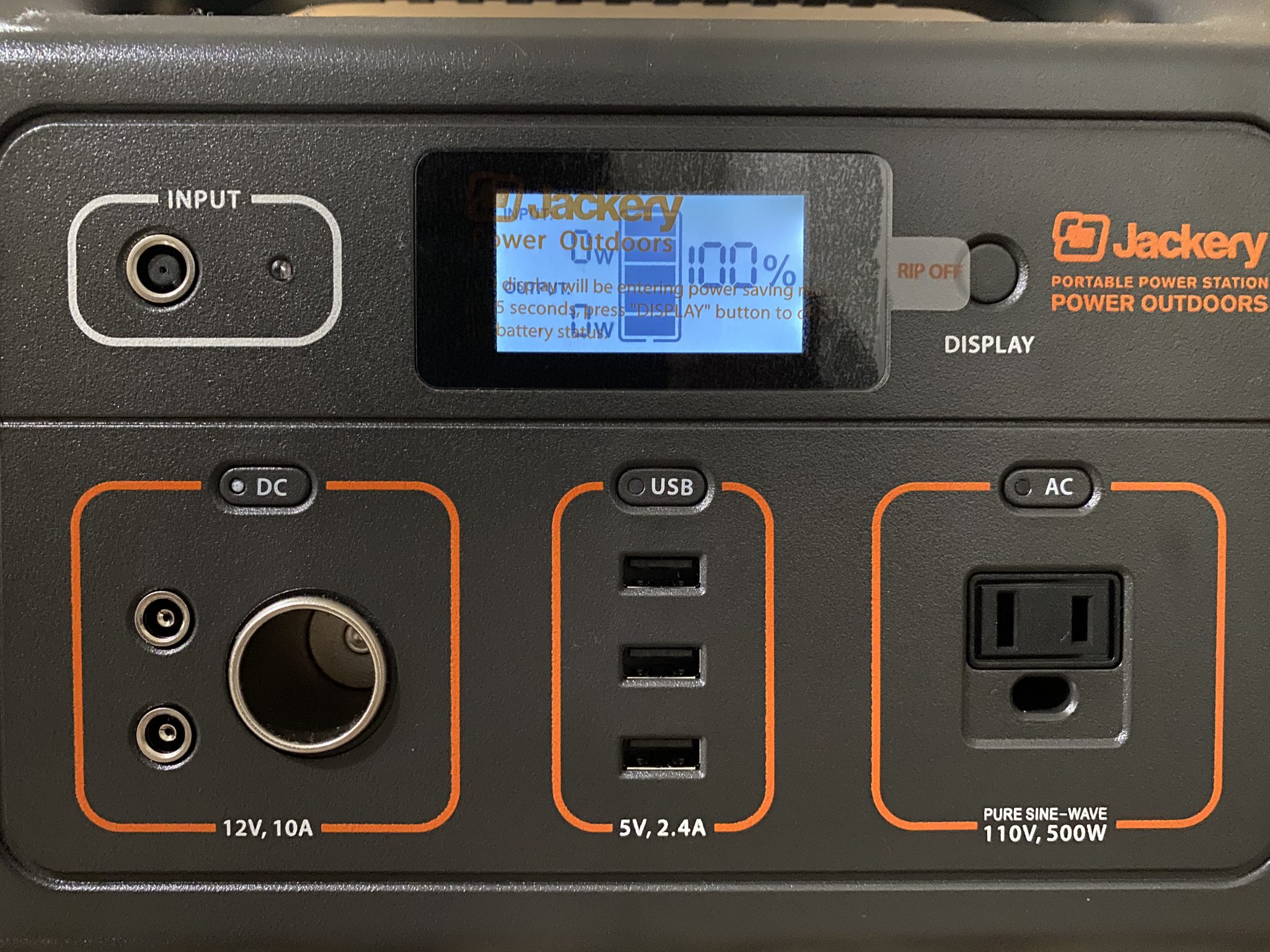 One of the things I was most concerned about with the Explorer 500 was charging the device itself. Its not the most complicated piece of equipment out there, but with its size and all that its ports can do, I was concerned that leaving it plugged in overnight, or when not in use would damage it. Luckily though Jackery adapts a 1000W surge peak, which as Jackery explains even if connected to power to charge, the Jackery will not burn out its charge, it will simply sit at 100% when charge and not continue to draw power from the connected source. While I havent practiced this in the car, when plugged in at home, once it hits 100%, the Explorer 500 sits there, with its LED panel going dim instead of the charging Blue color once charging. 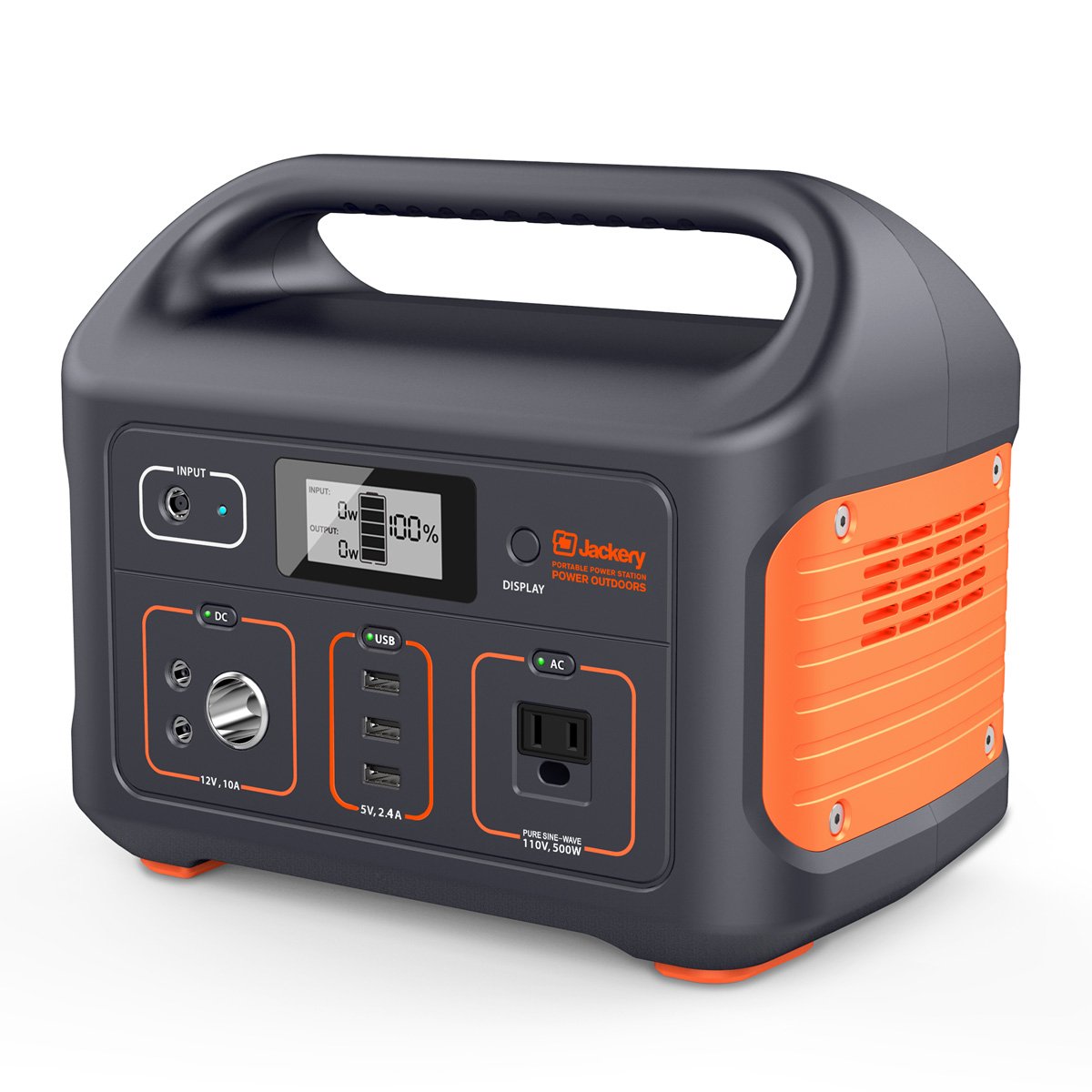 One thing thats worth mentioning is that the Explorer 500 is stated to last for over 500 total cycles. Further explained this is 500 cycles to 80% which is explained by Jackery means you should only charge the Explorer 500 every 3-6 months to avoid short-circuiting or damaging the internal battery. This is just a necessary precaution that pairs with the power stations own Over Voltage Protection that I stated earlier. 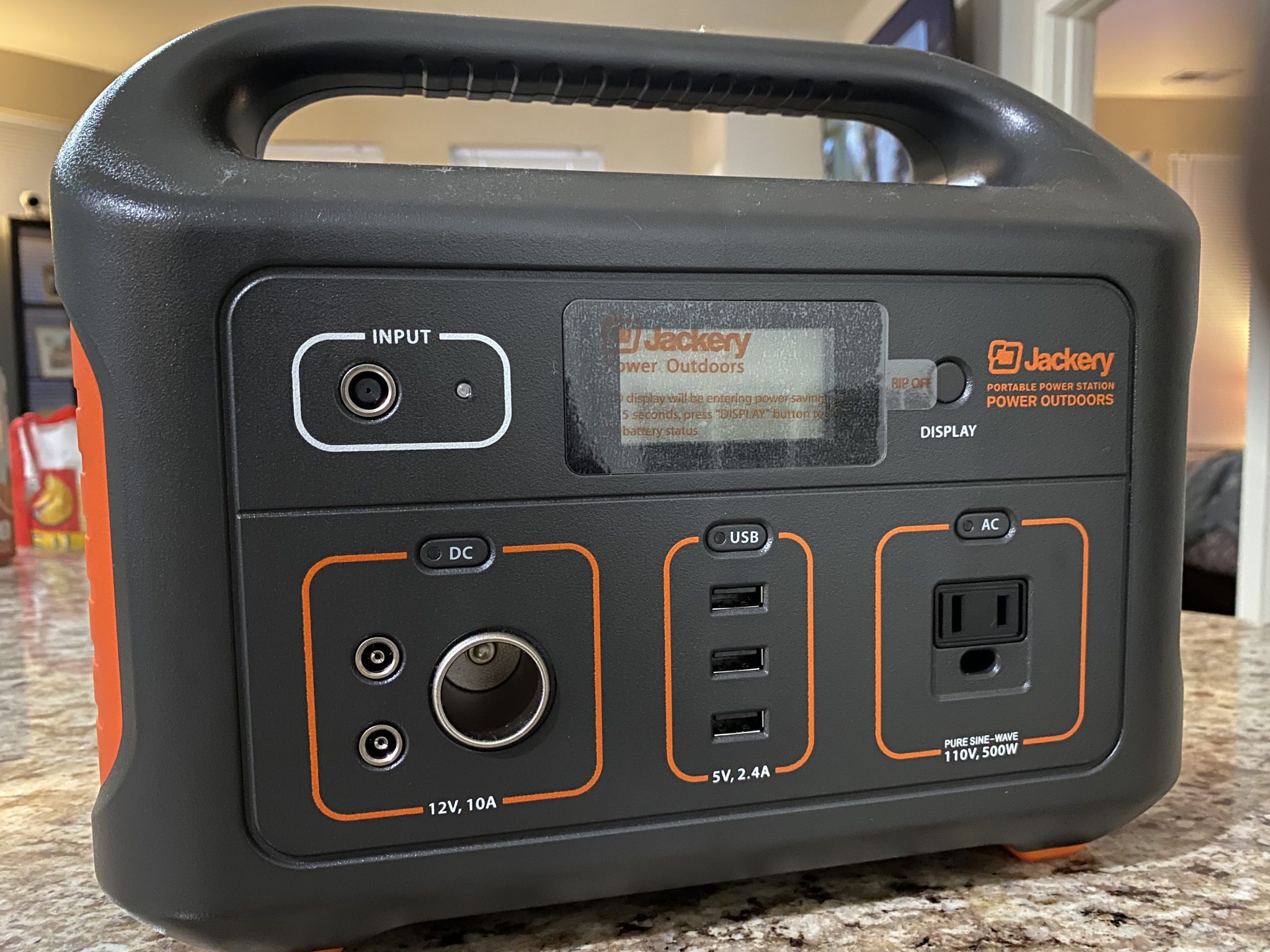 It features an AC outlet, perfect for plugging up an additional wall plug that you otherwise wouldnt have the access to. Regardless if you are an outdoors person, this is one of the best products in its class that you could get. This is great at the poolside or even at a birthday party, giving you the ability to keep your smartphone charged, your Bluetooth Speaker fully charged while in use, and if it gets too dark to see your surroundings theres an internal flashlight that makes things a bit easier to see. 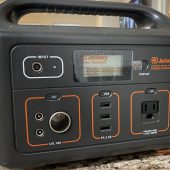 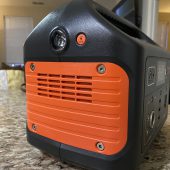 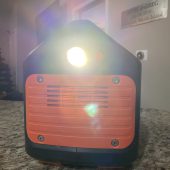 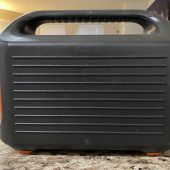 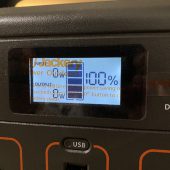 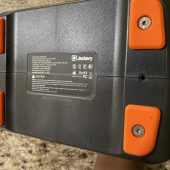 Charge all of the things with the Jackery Explorer 500 Portable Power Station. You can learn more here, and you can purchase it on Amazon [affiliate link]. If you tend to go off the grid, I suggest grabbing the portable solar panels at an additional cost. Paired with the Explorer 500, the Explorer 50W Solar Panel allows for charging efficiency and only costs $199.99. You can check those out here.

What I Like: Great as a backup in the event of a power outage; Useful on the go; Great for camping