These NYC Creatives Revamp Their Living Room on a Weekly Basis 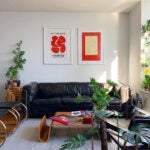 Most people move into a new apartment and their furniture stays almost exactly where the movers dropped it until the lease ends. For startup head of growth Nick Lowry and menswear designer Anne Li, however, every weekend is a game of musical chairs. A Craigslist Italian leather sofa, a handful of cantilever dining chairs, and a wood coffee table constantly play Tetris in their Long Island City, New York, one-bedroom in order to best suit the couple’s needs. When they want to watch the sunset from their south-facing windows, they flip the sofa around. When a workout is on the calendar, they remove the chairs entirely.

The pair approaches each tweak with equal levels of excitement (“We get to move the couch again!”). “We signed the lease during the peak of New York’s lockdown, and rearranging everything gave us a sense of newness when we were stuck inside,” says Li. “Two years later, we haven’t stopped.” Here are five arrangements that Lowry and Li return to consistently.

The most common configuration features the sofa along the back wall with their favorite Wassily armchair positioned by the bookcase. It not only makes the 19-foot-wide apartment (already big for NYC standards) feel massive, it lets in the maximum amount of natural light. “It’s what drew us to the apartment in the first place,” notes Lowry. “There’s no taller building to block it.”

For Work From Home

As a clothing designer for Kith, Li often brings her projects home with her from the office at the end of the week. “I’ll text Nick, and he’ll swing the couch over to the side so I can have as much hard-floor space as possible to sew,” she explains.

Lowry and Li don’t indulge in a lot of TV, but everyone needs a good binge-watch from time to time. When that’s the case, the sofa will face the wall, and they’ll set up their portable projector to cast underneath the two art prints, hung higher than normal at 49 inches from the floor for this very purpose.

When it’s video game time, however—the two are big Nintendo Switch fans—the sofa remains facing the wall and the couple pulls out a handy pop-up projector screen from the closet. “It creates a little gaming nook that’s fun to have when friends are over,” says Lowry. Floor cushions take precedence over the dining chairs, and everyone squeezes onto the rug.

“We call it our mid-century intervention doctor’s office,” jokes Li of this configuration. A line of their dining chairs faces the sofa, and the coffee table is abandoned in favor of IKEA stools. Despite the quirky inspiration, the setup really does create the perfect intimate environment for deep conversations with pals or just a quick catch-up at the end of the day.

Lowry and Li like to position their guests (and themselves) so they have a straight-on view of those cooking. The sofa and rug get placed underneath the windows by the bookshelves. “No one feels excluded,” explains Lowry. Everyone can hang out in the same space, without any shouting or awkward craning of necks.

The post These NYC Creatives Revamp Their Living Room on a Weekly Basis appeared first on domino.